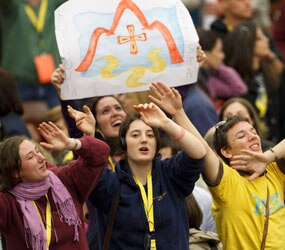 VATICAN CITY – Pope Benedict XVI announced a special “Year of Faith” to help Catholics appreciate the gift of faith, deepen their relationship with God and strengthen their commitment to sharing faith with others.

Celebrating Mass Oct. 16 with participants in a Vatican conference on new evangelization, the pope said the Year of Faith would give “renewed energy to the mission of the whole church to lead men and women out of the desert they often are in and toward the place of life: friendship with Christ who gives us fullness of life.”

“It will be a moment of grace and commitment to an ever fuller conversion to God, to reinforce our faith in him and to proclaim him with joy to the people of our time,” the pope said in his homily.

He said the Catechism of the Catholic Church, first published in 1992, should serve as the handbook for helping Catholics rediscover the truths of faith and deepen their understanding of church teaching.

The Congregation for the Doctrine of the Faith, he said, will publish a “note” to help people live the year “in the most effective and appropriate ways at the service of belief and evangelization.”

Jesuit Father Federico Lombardi, the Vatican spokesman, told reporters the document would be published by the end of the year; its tone will be pastoral, rather than doctrinal, giving bishops and Catholic faithful ideas for implementing the pope’s call to deeper faith and greater missionary commitment.

In his apostolic letter, the pope said the year’s focus will be on Jesus Christ because “in him, all the anguish and all the longing of the human heart finds fulfillment.”

Pope Benedict said that in addition to studying the catechism and gaining a greater understanding of the creed, the Year of Faith also must be accompanied with more acts of charity.

Faith helps people recognize the face of Christ in those who are suffering, and “it is his love that impels us to assist him whenever he becomes our neighbor along the journey of life,” the pope wrote.

“What the world is in particular need of today is the credible witness of people enlightened in mind and heart by the word of the Lord, and capable of opening the hearts and minds of many to the desire for God and for true life, life without end,” he wrote.

The papal Mass and announcement of the Year of Faith followed a daylong conference Oct. 15 sponsored by the Pontifical Council for Promoting New Evangelization.

Archbishop Rino Fisichella, head of the council, told the representatives that their presence and activity is proof that “the new evangelization isn’t something new introduced with the pontifical council; it’s a reality already working in the church.”

Conference participants discussed how to better evangelize in the area of culture, among immigrants, in Catholics’ political involvement, through the use of media, in families, through the liturgy and in active, lively parishes.

The main points were illustrated by leaders from Communion and Liberation, the Community of Sant’Egidio, the Brazilian media group Cancao Nova, the Neo-Catechumenal Way, the Emmanuel Community, the charismatic renewal and an Italian parish renewal program.

Cardinal Donald W. Wuerl of Washington told the gathering that catechesis is essential for any program of new evangelization. “When a person is well-grounded catechetically – that means each one of us renewing our faith – that person has the confidence to be able to express it” and “to invite others into the experience of faith,” he said.

“We have spoken a great deal today about this very secular world in which we live,” he said, “but we also need to recognize that among many, many of our young people there is an enormous openness to hearing about Christ. Many of them are seekers.”

The day’s focus on new evangelization continued in the evening in the Vatican audience hall where an atmosphere similar to a tent revival reigned. The speakers – the Spanish founder of a thriving new religious community of women, a journalist, an astrophysicist and a Colombian bishop – gave personal testimonies. The crowd of about 8,000 people, mainly from new Catholic movements, erupted in applause anytime one of the speakers spoke about the basic tenet of Catholic faith: belief in Jesus as savior.

The astrophysicist, Marco Bersanelli, used his own experience of wonder and awe before the cosmos as a lesson on the error of assuming that scientists cannot be faithful Christians and evangelizers.

The evening event, which featured a mini-concert by tenor Andrea Bocelli and a speech by Pope Benedict, also marked the official announcement of a new internet project supported by the Pontifical Council for Social Communications and established by Jesus Colina, who recently resigned as head of the Legionaries of Christ’s Zenit news service.

The new platform, Aleteia.org, is designed to be a multimedia “community” where people can ask questions about Catholic faith and practices and receive answers they can be sure are in line with official church teaching.

“The internet is where people go for answers today, even about God, religion and faith,” Colina told the assembly, announcing that the website would be launched Oct. 19.

He said the site would involve journalists and theologians from around the world and would link to “the best sites” for Catholic teaching and information.

Catholics “need to create networks on the net – not get more hits than one another,” he said.