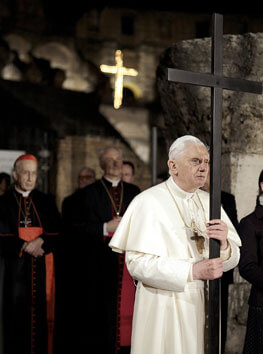 WASHINGTON – The genesis for a documentary on why people use religion and faith as justification for some of history’s most horrible acts came from one recent horrible act: the World Trade Center attacks of Sept. 11, 2001.

Jules Naudet, who with brother Gedeon produced the upcoming CBS documentary “In God’s Name,” collaborated with his older brother on “9/11,” which aired on CBS five years ago.

Until those terrorist attacks, the Naudets were planning on making a documentary on the lives of firefighters. What resulted was something entirely different. And the effects of that tragedy provided some motivation for “In God’s Name.”

“It was the moment where I was filming in the lobby of the World Trade Center, and hearing that horrible roar coming from above,” the Paris-born Naudet told Catholic News Service in a Nov. 30 telephone interview from New York, his home for the past 18 years.

He and his brother were at the trade center that day because they had begun work on their film about firefighters.

“Having the first World Trade Center tower coming down on us, me running for my life and thinking I was going to die,” Naudet said, “this strange question popped into my head: Why am I here? What is the meaning of life? I survived that day, and for a few months these questions were in the back of my head and nagging me. I talked it over with my brother.”

They decided “why don’t we go to see the people who should have these answers? These are kind of the spiritual beacons on our planet,” he said.

Pope Benedict XVI is one of 12 spiritual leaders, five of them Christian, featured in the documentary. Non-Christians include the Dalai Lama, the chief rabbi of Israel, a Hindu spiritual leader and a prominent Sunni Muslim leader. The pope was the only one of the 12 who did not sit down with the Naudets for a private interview.

“The Vatican historically has not given interviews. A pope has not given a private interview because his exclusivity in a way would not be fair,” Naudet told CNS. “But I think we worked very closely with him. We went through all the archives and found features of His Holiness to find answers to the questions we had: What is the meaning of life? What is the future, his hopes, his fears?”

Through the archival research, they were able to find images “that never had been seen before,” Naudet said. “I think people will look differently on the pope when you see him. … That will give them another dimension that people would not previously see.”

The Naudets can’t say yet exactly what viewers will see when “In God’s Name” hits the airwaves Dec. 23, 9-11 p.m. EST. They’re still in the editing room when they’re not granting interviews. Making a film, Naudet said, is like “putting together this amazing and beautiful puzzle. It’s hard to do.”

The brothers calculated that over 165 days of filming “we have 180 hours of footage to condense into a two-hour special. It’s heartbreaking in a way. Every time you remove something you feel like you’re tearing a limb from yourself,” Naudet said.

The two have been a filmmaking team since boyhood.

“He (Gedeon) was 12, I was 9 and I was more the actor and he was the director,” Naudet said. “We had our dad lend us a small camera and we made our first film, which I think was a small thriller, which was in our neighborhood in Paris, and then (we made) a small documentary about our school. Then we went to film school in New York together.

“We see slightly different things. We are a body with two different heads. We arrive at the same conclusion but from two different points of view,” he added.

Raised as an agnostic by their parents, Naudet said his beliefs didn’t change when making “In God’s Name.”

“I don’t think I can say at the end of the journey itself after meeting these people that I found God,” he told CNS, “but I found hope – which is what I was wrestling with. I did not know what kind of answers we were going to get. It was a little frightening.

“The lesson I get from this is that we have more to unite us than divide us,” he said. “That is what gave me great hope.”