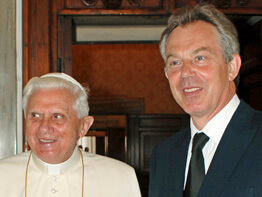 VATICAN CITY – When Tony Blair came to the Vatican to meet Pope Benedict XVI in June, there was excited speculation that the outgoing British prime minister might be preparing to become a Catholic.

Across the ocean, meanwhile, Republican presidential candidate Rudolph W. Giuliani, a lifelong Catholic, was taking heat from some church leaders for his stand on abortion. Abortion is wrong, Mr. Giuliani has said, but the government shouldn’t be enforcing that moral decision on women.

Mr. Blair has similar views on abortion, saying that as much as he may “dislike the idea of abortion” it should be kept legal. Like Mr. Giuliani, Mr. Blair has said women who choose abortion should not be criminalized.

The position of both men is not in line with the church’s teaching on the sanctity of human life. But to some observers, it seemed like the church was putting out the welcome mat for the potential convert and preparing a penitent’s robe for the Catholic.

“It may seem like a double standard, but in fact it’s a bit more complicated than that. For one thing, Blair is leaving office,” said one church source close to the Vatican.

Other Vatican officials, who spoke off the record, agreed that because Mr. Blair stepped down from public office June 27 – apparently for good – his political position on abortion is not really an obstacle to joining the church. The important thing is that he accept the church’s prolife teachings in his own conscience, they said.

“Becoming a Catholic is not a la carte. One would presume that there is a willingness to accept the teaching of the church on all aspects of life, including abortion,” said one official.

Some believe that given Mr. Blair’s previous statements about keeping abortion legal, he would need to make clear in a public way that he now agrees with the church’s teaching on the issue before joining the church.

But others said the act of becoming a Catholic would itself constitute a clear sign of acceptance of church teachings, and good faith would be presumed unless it were contradicted by some subsequent public action.

Church experts said there is no checklist of church teachings that need to be acknowledged by those seeking to join the Catholic Church. For baptized Christians like Mr. Blair, the Rite of Christian Initiation of Adults recommends a program of religious instruction tailored to the individual’s needs, carried out by a local priest, deacon or catechist.

Despite the growing speculation in the British press about Mr. Blair’s religious intentions, there was no indication from the Vatican that the question of becoming a Catholic was discussed in his private meeting with the pope.

Several Vatican sources said they expect Mr. Blair to take the step sometime in the near future, but they said they hoped it would be treated as a private matter.

“This is not the kind of thing like at Canossa, where an emperor was made to walk barefoot in the snow,” said one source. He referred to the famous case of the Emperor Henry IV, who did public penance in the Italian city of Canossa in 1077 before his excommunication was lifted by Pope Gregory VII.

Mr. Giuliani, a former mayor of New York, is leading among Republican presidential candidates in national polls. In late May, Bishop Thomas J. Tobin of Providence, R.I., sharply criticized Mr. Giuliani for saying he is “personally opposed” to abortion but would not impose that view on others.

Bishop Tobin said Mr. Giuliani’s public proclamations on abortion were “pathetic and confusing” and represented a “defection from the Catholic faith on this moral issue.”

Although Bishop Tobin is not Mr. Giuliani’s bishop, his comments have echoed loudly in recent coverage of the emerging presidential campaign. They have also reached the Vatican, which in recent years has underlined the responsibility of Catholic politicians on abortion and other life issues.

In May, Pope Benedict, speaking about recent legislation in Mexico, indicated that Catholic lawmakers who vote to legalize abortion could even face excommunication.

Even when abortion is not up for a legislative vote, many church officials believe the church has no choice but to address the “scandal” of a Catholic candidate who espouses the right to abortion.

But others are reluctant to see a repeat of 2004, when Communion became a political football. During that presidential campaign, a handful of bishops said Sen. John Kerry, D-Mass., a Catholic, should be refused Communion because of his support of legal abortion.

The Communion issue seems unlikely to present itself in Mr. Giuliani’s case. He is said to refrain from taking Communion because he is married for the third time, and his second marriage was never annulled by the church.