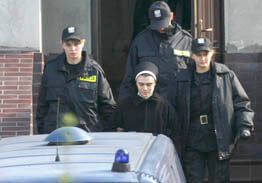 WARSAW, Poland – Police evicted several dozen former nuns from a Polish convent after they refused a series of court orders to leave.

A force of 200 police, supported by ambulances and firetrucks, forced entry Oct.10 to the motherhouse of the Sisters of the Family of Bethany in Kazimierz to evict the women, who have been laicized by the Vatican and expelled from their order.

Sokolowski also said former Franciscan Father Roman Komaryczko had been arrested after “acting aggressively” and five women from Russia and Belarus who were detained at the convent would be deported.

During the evening news, Poland’s state television showed the mostly young women smiling and waving to the cameras while awaiting eviction. More than 60 women were bused to retreat centers in other cities; Poland’s Gazeta Wyborcza daily said Oct. 11 that most had left for unknown locations later in the day.

Trouble erupted at the convent in 2004, when the then-mother superior, Sister Jadwiga Ligocka, was dismissed by a Vatican delegate but occupied the convent with 65 nuns and novices.

In February, the Vatican expelled the women from the order, which said concern had arisen over “personal and organizational decisions” by Ligocka, who also claimed she had private visions in conflict with Catholic teaching. Gas and electricity supplies to the convent were cut off after the Vatican expulsion.

In an Oct. 10 interview with Poland’s Catholic information agency, KAI, Archbishop Jozef Zycinski of Lublin blamed the conflict on Ligocka’s “psychiatric problems” and thanked local authorities for intervening. He added that the former superior had attempted “to act as a guru who assumed the place of Christ.”

“When I tried to have a dialogue with them two years ago, I immediately saw they would not accept any rational argument,” the archbishop said.

“At present, they are laypeople, so reactions and commentaries which suggest the police have expelled nuns are totally improper,” he said. “It isn’t a habit that makes someone a nun, but her consecration to Christ, and the consequences of that consecration are vows made, including the duty of obedience.”

Father Mieczyslaw Puzewicz, spokesman for the Lublin Archdiocese who was present during the eviction, told KAI the nuns had formed a sect. He added that their conduct during the eviction had shown “a high degree of psychomanipulation, linked to aggressive behavior.”