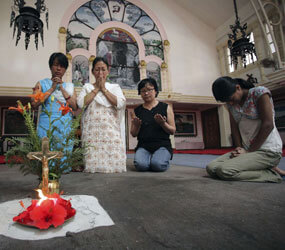 KATMANDU, Nepal – Police have arrested a woman who allegedly planted a bomb that killed three people and injured several others at Assumption Catholic Church.

Sita Thapa Shrestha, 27, who was arrested in Katmandu June 2, has confessed to the May 23 crime, according to police.

Father Robin Rai, parochial vicar at Assumption Church, said that Balan Joseph, whose daughter and wife died in the blast, identified Shrestha as the woman who left a bag inside the church. Soon after she left the church, the bomb in the bag exploded.

“The woman seemed to take pride in what she did,” said Father Rai, who saw the suspect at the police station.

Kavita Rai, an Assumption church parishioner, told UCA News that she had seen Shrestha and her young son attend Mass on Saturdays for more than a month.

According to media reports, Shrestha told the police that she was a member of a Hindu group, Hindu Rashtra Bachao Samiti (Society to Save the Hindu Nation), and she was also associated with organizations working for the welfare of women and children in Katmandu.

The Nepal Defense Army, an obscure Hindu extremist group, claimed responsibility for the bombing. Media reports suggested Shrestha had been inspired by the extremists and had been willing to become a suicide bomber.