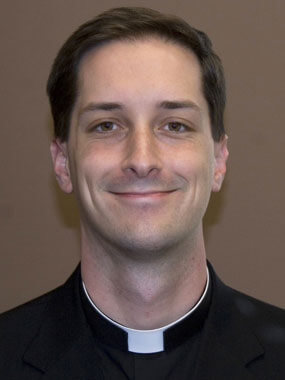 GARDEN CITY, S.C. – A poker-playing priest from South Carolina is one step closer to winning $1 million for his church’s building fund.

Father Trapp beat three opponents, including professional poker champion Daniel Negreanu, to win the final prize. While waiting for his cards to be revealed in the final round, he held his rosary in his hands and bowed his head.

He will now join three other players who won $100,000 for the championship round in December.

Father Trapp traveled to Los Angeles Oct. 3-5 to appear on the first episode of the game show. He couldn’t reveal the results before the program aired.

The priest, who has played the Texas Hold ‘Em variety of poker for fun for several years, competed against thousands of others in online tournaments and submitted an audition video to get a spot on the show.

“I really still can’t believe how things went, and I’m very thankful for everybody’s support, encouragement and prayers,” Father Trapp said in an interview with The Catholic Miscellany, newspaper of the Diocese of Charleston.

“The thing I’m most happy about is that everybody has been telling me I represented the priesthood and the church in a positive way. The fact I was able to win $100,000 for our church makes it even better,” he said.

Father Trapp said one of his friends told him afterward that he thought “God was shuffling the deck.”

All of his winnings – after taxes – will go toward building a new church at St. Michael, which has grown dramatically in recent years. Father Trapp also wanted to show viewers a fun side of his life as a priest. He said the money is guaranteed and the show will be writing a check directly to St. Michael Church.

Poker is just one of his many hobbies, which include watching movies, playing strategy games, soccer and paintball.

“It’s always been just something to do for fun,” Father Trapp told the Miscellany. “Even Jesus relaxed and had a good time with his friends.”

He learned about the Fox show during the summer. The format is simple: 21 contestants from the United States and Canada are coached by Negreanu the pro as they play increasingly difficult opponents. Those who make it through the challenges earn a seat at the table on the last episode, where they’ll play for $1 million.

Father Trapp said he immediately thought the program would be a great way to raise money for a new church building, and to show that priests could have fun while serving God.

To qualify, he had to finish in the top 10 out of 10,000 players in an online poker tournament sponsored by the show, and then submit a two-minute audition video.

After his video was complete, Father Trapp showed it to Charleston Bishop Robert E. Guglielmone at a meeting, and received approval to try out.

“He really liked it, and thought this was a great opportunity to show the priesthood in a different light, to show that priests can enjoy themselves like other people,” said Father Trapp, who found out in late September that he was chosen to play.

He said some people may question whether a priest is allowed to play poker, especially since many Christian denominations discourage gambling and games of chance. He said the PokerStars format is similar to other game shows such as “Jeopardy” or “The Price Is Right,” with contestants using poker wins to move through each round to the finals. No betting is involved.

On his Web site, www.saintfactory.com, he cited a passage from the Catechism of the Catholic Church that states games of chance are not bad unless they “deprive someone of what is necessary to provide for his needs and those of others.”

“The church’s teaching generally is that it’s not sinful to play games of chance, but it is wrong, for instance, to gamble away your whole paycheck,” he said. “It’s the same with the stance on alcohol. Drinking a glass of wine or a beer isn’t wrong, but drinking to excess is.”

“I hope this helps young viewers to see that a person can give his or her life to Christ, serve God and still have fun and enjoy time with friends,” Father Trapp said. “Whatever hobbies and interests we have, God can use those as a way of spreading the Gospel.”