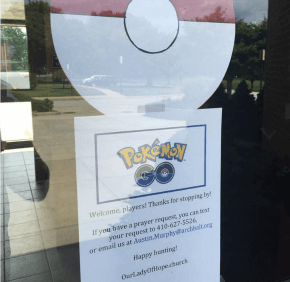 By Cameron Rogers
Special to the Review
Churches in the Archdiocese of Baltimore have been getting an influx of visitors recently, but not for the reasons they might expect.
Since its July 6 release in the United States, Pokémon GO has won the hearts of children, teens and adults nationwide. It is a spin-off of the popular Pokémon franchise where players use their smartphones to locate, capture and train creatures.
The game has a system of hotspots for in-game activity, known as “PokéStops,” that brings players to commonly-trafficked locations. Some churches in the archdiocese have reported that players have visited their parishes – smartphones in hand – as they enjoy the game.
“It’s been an interesting couple days,” said Joe Liberto, technology manager at St. Joseph in Cockeysville.
According to Liberto and other staff from St. Joseph, dozens of people have been stopping by the church to use its six PokéStops and in-game gym, where players can train their Pokémon against those of other users.
Karen Osborne, another St. Joseph staffer, said there have been discussions about possible ways to encourage people into church with Pokémon GO.
Father Michael Carrion, pastor of Immaculate Heart of Mary in Baynesville, reported a massive increase in foot traffic around his parish starting July 10. Without anyone in the church’s staff realizing it, the grotto and statue of the Blessed Virgin Mary had become popular PokéStops.
“I had no idea why we had this sudden increase in both the foot traffic and the vehicular traffic on the adjacent parking lot, with people staring at their cell phones,” Father Carrion said. “Someone mentioned on Tuesday about this Pokémon craze that was becoming popular.”
Father T. Austin Murphy Jr., pastor of Our Lady of Hope in Dundalk and St. Luke in Edgemere, said his churches were also receiving more visitors due to each campus having two stops.
At Our Lady of Hope, Father Murphy posted a sign on a church door, welcoming players and displaying the parish’s website address and contact information for prayer requests. The sign featured a hand-drawn Pokéball, a device used in the games to capture Pokémon. A photo of the sign was posted on Our Lady of Hope’s Facebook page, garnering 58 “likes” and 48 “shares.”
Other parishes, including St. Jane Frances de Chantal in Riviera Beach, have displayed similar signs.
Father Murphy was thankful for the opportunities Pokémon GO was providing for gamers to both meet new people and encounter God.
“It’s like a modern version of the woman at the well,” he said.
The Pokémon GO craze has led to interactions between parish staff and gamers around the archdiocese. In some instances, such as in Liberto’s chats with players at St. Joseph, it is simply to understand the game better. Others seek to inspire curiosity about Catholicism and Christianity to players.
Liberto was enthusiastic about the game’s potential to build awareness of local churches and their activities. He has been reading about the game to know more about it and its features.
Father Murphy said he was not sure how Pokémon GO will factor into the future of churches, but he believed it was important to seize any opportunities God gives for evangelization.
“There’s a lot of souls to save,” he said, “and a lot of those little animals to catch.”

Cameron Rogers, a summer intern with the Catholic Review, is a rising senior at Hood College in Frederick and 2013 graduate of Archbishop Spalding High School in Severn.

Also see: Pokemon Go, we choose you! Or why we’re having a little too much fun with the latest augmented reality game