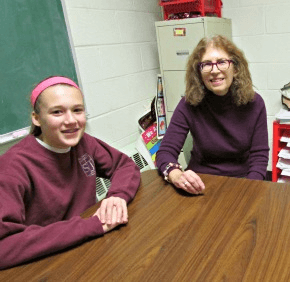 By Nancy Menefee Jackson
Special to the Review
Kindness is spreading in schools throughout the Archdiocese of Baltimore, thanks to Annabelle Arnold, a senior at The Seton Keough High School in Baltimore, and a powerful movie.

As a seventh-grader, Annabelle saw “Finding Kind,” a documentary about the “mean girl” phenomenon, and the accompanying Kind Campaign presentation, which encourages girls to change the behaviors that lead to exclusion and girl-on-girl bullying.

“It blew my mind,” she said. “It was amazing. It changed my outlook.”
When her mother learned that the movie and its creators, Lauren Parsekian and Molly Thompson, toured and gave presentations, Annabelle wrote and asked them to come to Seton Keough – which they did last Oct. 19.
At the Kind Campaign presentation, students signed a “Kind Pledge” and shared similar activities.
Also in attendance were middle-school girls from six Catholic schools, accompanied by a parent. Now they are mentoring younger students at their respective schools, sharing what they’ve learned.
“This kind of relational aggression between girls has been going on forever, but we’re much more aware and  proactive,” said Gail Vernick, a school counselor at St. Joseph School in Fullerton.
Such behavior can be insidious – gossiping, spreading rumors or excluding a former friend.
Sarah Spaulding, a counselor at School of the Incarnation in Gambrills, said the behavior can start as early as kindergarten and even pre-K, with one girl saying, “I don’t want to be your friend today.”
Friendship issues surface by third grade; in younger grades, it takes the form of “I’ll be your friend today; I’m not going to be your friend tomorrow.” Teasing starts then, too, Vernick added.
In older grades, especially with more social media use, the behavior becomes more exclusionary; rumors are spread and students with more social status deliberately leave someone out.
Spaulding liked that the program at Seton Keough “emphasized that it didn’t take anything to be kind. Anyone can be kind,” and that girls can have a lasting impression on someone – good or bad.
Fruits of the Kind Campaign can be seen at St. Joseph School.
“It let me know there are a lot of people going through the same thing,” eighth-grader Grace Whaley said.
Seventh-grader Jacqueline Garst liked that the movie emphasized not letting such behaviors occur unchallenged, saying, “Middle and high school are not very long – you don’t want to be remembered as the mean girl.”
Seventh-grader Kendall Feiler said, “People remember being called those (hurtful) words. Girls just say things to say things and they don’t think about it – you’ll regret what you said.”
Added Grace, “You’re not only ruining their life, you’re ruining yours. As Christians we should treat others as we want to be treated.”
The girls said they have noticed more positive comments among their friends on Instagram, a popular social media platform.
Seventh-grader Clarisse Dapul said, “People bully because if they’re with a group of friends, they think it’s cool. You have to be kind to each other. You might not get a lot of friends, but you’ll get the right friends.”
After joining the Kind Campaign, which reinforces the Christian behavior emphasized in Catholic schools, Incarnation seventh-graders wrote assignments about what they planned to do, hosted a lunch on the subject, and volunteered with sixth-grade girls.
Sabina Feiler, a St. Joseph parent who attended, said she thought the girls could relate to the young women who created the movie because of their own experiences of being bullied.
“They were beautiful girls – you felt like it if could happen to them, it could happen to everyone,” she said. “There wasn’t a dry eye – all the adults were crying. I felt like it touched everyone.”

Click here to watch a trailer for Finding Kind.
PrevNext