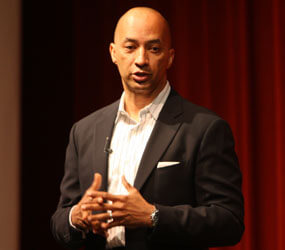 “I tell you, one of the interesting things about Curley is, except for the haircuts, you guys look just like my classmates,” Pitts quipped.

Pitts, a graduate of Curley’s class of 1978 and a CBS television journalist, returned to Curley Sept. 20 to answer questions from the East Baltimore school’s students in its auditorium. Students and staff at the all-boys school were required to read Pitts’2009 book, “Step Out On Nothing: How Faith and Family Helped Me Conquer Life’s Challenges” during the summer.

Pitts has reached the pinnacle of America televised journalism as a regular contributor to “60 Minutes.” During his career, Pitts has provided coverage of Sept. 11, 2001, interviewed the last six U.S. presidents and covered wars and post-earthquake Haiti.

No matter where he goes in the world, though, Pitts said he carries Curley with him. It wasn’t always that way, though. When it came time to attend a high school, he chose Curley because, “my momma said I was going to Curley.”

She was impressed by the school’s education and discipline.

“I am so glad that I did (attend the school), because I am so very proud that I am a graduate of Archbishop Curley High School,” Pitts said.”Wherever I go, I tell people I’m from Curley.”

In his book, Pitts wrote about the strength his mother showed in raising him alone in Baltimore City. He spent his early education illiterate and had speech issues. Thanks to his elementary school, St. Katharine, and Curley, he began to address his struggles.

Last year, he re-visited St. Katharine for a story on illiteracy

Pitts blossomed on the football field at Curley and found his place as a student. As he grew up, Pitts was picked on by his peers

Freshman Adam Cupp said that in reading “Step Out On Nothing,” he found Pitts to be a kindred spirit. He, like Pitts, was once a victim of bullies.

“I fought through it like he did by dealing with it,” Cupp said. “Even though they hurt you emotionally, you can’t let them win.”

Similarly, junior Kevin Collins said Pitts’ story of overcoming his issues was inspirational. Even after reading his book, he found Pitts’ talk powerful.

“I feel like the talents God gave me are supposed to be used for the greater good,” Collins said.

Pitts told students to not take a Curley education for granted.

“This place will change your life if you let it,” Pitts said. “Whatever you dream to do, this is a place that allows dreams to come true. I am a witness.”

“Our paths didn’t cross too much while we were here together, but I am very pleased and happy that both of our paths have brought us back to this stage this morning,” Benicewicz told Pitts.

Covering New York after the terrorist attacks, Pitts said he saw people fall to their death just mere feet away. He was touched by the resiliency of Americans in the days that followed and reminded that as a Curley man, he was charged to make a difference.

In his parting words, Pitts challenged the students.

“As men of Curley… I know for a fact that there are men seated in this room who can solve some of the world’s problems,” Pitts said. “I want each of you to be ashamed to die until you have won some victory for humanity.”