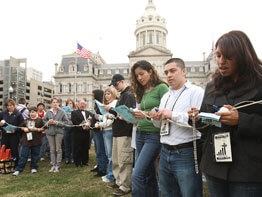 The “young church” thronged the sun-filled streets of East Baltimore, as some 1,300 Catholic pilgrims followed youths carrying a large wooden cross and bundles of palms March 15 through neighborhoods decked out for St. Patrick’s Day.

“It’s always an exciting day,” said Bishop Malooly, who was pleased that so many youths from Western Maryland traveled by bus to participate in the Pilgrimage for Youth and Young Adults. “This is really nice because you’re actually walking through neighborhoods; people come out of their houses, and these are two beautiful churches.”

He enjoyed the enthusiasm of the pilgrims. “It’s good for us old folks, too,” he said with a smile.

Hours later, the pilgrimage ended at the Basilica of the National Shrine of the Assumption of the Blessed Virgin Mary, Baltimore, where the tired crowd flooded the grounds, brandishing palms, as twilight softened the outlines of the building.

In between was a journey of faith that urged young Catholics to “Answer the Call” – the day’s theme – by turning away from a self-centered life to one that seeks to serve God.

“Good afternoon, young church of Baltimore,” said Archbishop O’Brien at the event’s opening rally, noting the crowd for the 15th annual pilgrimage was the largest ever. “Let us celebrate the opportunity to be together as Catholics, to walk together, to pray together … to proclaim the victory of Jesus’ cross – that’s what this day is all about.”

The boisterous rally, where youths greeted friends from across the diocese, quickly gave way to the solemn, hushed expectation of eucharistic adoration inside St. Casimir.

Sister Julie Fertsch, S.S.J., from The Seton Keough High School, Baltimore, shared how she resisted the call of God because she didn’t want to become a nun. She drew a laugh when she said she wanted to go to college “and party my face off.” She detailed how she ultimately chose to answer the call.

“To me there was nothing worse than the idea of running from God all my life,” she said. “For me this call is the right call. The reason I stay is because I want to be like Jesus.”

Archbishop O’Brien noted that when Jesus calls the disciples, “there is no bargaining, persuading or even discussing – it’s come follow me.” He listed the would-be disciples who hesitated – a rich man who didn’t want to give his wealth to the poor, one who wanted to say goodbye to his family, yet another who was willing but wanted to bury his father first.

“Jesus said to him, ‘Leave the dead to bury the dead,’” Archbishop O’Brien said. “For everyone who follows Christ there are radical decisions to be made.”

Whether someone is being called to married life or vowed life, Archbishop O’Brien noted, “all require some renunciation of self.”

The program at Holy Rosary included a concert by popular performer Steve Angrisano. After that, the pilgrimage wound its way from Fells Point through the Inner Harbor to War Memorial Plaza, where the crowd prayed the rosary in English and Spanish with rosaries donated by the Knights of Columbus. Then, bearing candles, it was up the hill to the basilica for Mass, where they were joined by Cardinal William H. Keeler and greeted at the front gates by the new rector, Father Jeffrey Dauses.

“It was really fun and exciting,” said Simone Osuji, a parishioner of St. Gabriel, Woodlawn, who was participating for the first time. “It’s something that I never really experienced before.”

“It was very moving, the fact that everybody was willing to get together for one purpose,” said Katie Lutz, from Sacred Heart, Glyndon.

Derrick O’Neal, an archdiocesan youth minister from Ss. Peter and Paul, Cumberland, was participating for the third time. “I love it,” he said. “It’s so much fun and you get to meet Catholics from all across Maryland.”

Said Archbishop O’Brien earlier in the day, “We are one body in Christ, and what a glorious demonstration of that body this is.”