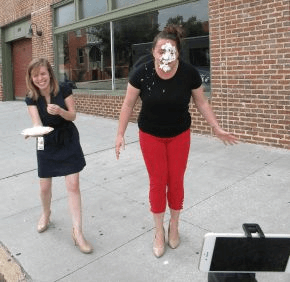 Moments after getting socked in the face with a whipped cream pie Aug. 31, Maureen Cromer seemed stunned and immobilized.

Standing on the sidewalk outside the Catholic Review’s Baltimore headquarters with pie dripping from her cheeks, the newspaper’s social media coordinator was silent for a moment. Quickly regaining her composure, she looked directly into an iPhone recording her every move and issued a challenge to the Baltimore Oriole most known for planting pies in the face of fellow teammates.

“Adam Jones,” Cromer said, “I’m challenging you to take a pie in the face for Partners in Excellence!”

Within an hour, the video was on Facebook receiving “likes” and “shares.”

Cromer was one of dozens of people throughout the archdiocese to take the “PIE Challenge,” a social media campaign to raise awareness and funds for Partners in Excellence (PIE). The archdiocesan PIE program provides scholarships to help students from low-income families in the city attend Catholic schools.

Participants are asked to donate $28 to PIE, the cost of educating one PIE student for one day. They then take a pie for PIE, share it on Facebook and challenge others to do the same.

“I hope that more people decide to donate to PIE because it truly is an amazing organization that opens doors for children,” said Cromer, a graduate of St. Mark School in Catonsville and The Seton Keough High School in Baltimore. “Catholic education is truly a gift, and I hope more people are given that gift as the years go by.”

The PIE Challenge, launched in August, is an initiative of Young Partners in Excellence (yPIE), a group of young adults who support PIE.

“We realized that young adults don’t have as much money as other donors,” said John McAvoy, yPIE vice chairman. “This was a fun opportunity for them to still support PIE without breaking their bank accounts.”

McAvoy, a graduate of Calvert Hall College High School in Towson, noted that the PIE Challenge is open to anyone of any age. Each participant is asked to nominate three friends and one celebrity, he said.

In addition to Jones, other prominent people who have already received the challenge include Gov. Lawrence Hogan Jr., Baltimore Raven Justin Tucker and Mike Rowe, CNN host of “Somebody’s Gotta Do It.”

“We felt like there was a need to get young Catholics together in Baltimore City and raise awareness,” said Roseman, a graduate of Notre Dame Preparatory School in Towson.

Proceeds from the PIE Challenge will be donated during a Sept. 9 PIE giving event.

‘The nicest crossing guard ever ‘

Contemplate, give thanks, protect: Pope Francis prays for creation