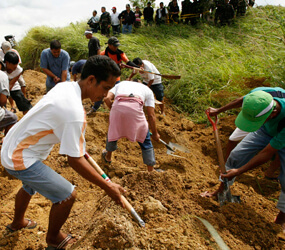 SHARIFF AGUAK, Philippines – The massacre of more than 45 unarmed civilians in the southern Philippines has drawn condemnation and expressions of shock, but local residents said the violence was to be expected.

The victims – journalists and supporters and relatives of gubernatorial candidate Datu Ismail Mangudadatu – were abducted Nov. 23 as they were traveling to file nomination papers for elections next May. Their bodies, some beheaded, were found nearby.

In a Nov. 24 statement, the Bishops-Ulama Conference, a conference of Christian and Islamic religious leaders advocating peace and development, condemned the abduction and killings, reported the Asian church news agency UCA News.

“This abominable sin was inflicted upon unarmed civilians whose only ‘crime’ was to proceed to the Commission on Elections office,” the religious leaders wrote.

One local priest, Father Eduardo Vasquez Jr., said friends had told him Nov. 22 that “something would happen” to relatives of Mangudadatu if they came to the Commission on Elections office in Shariff Aguak.

“Many armed men” had been seen around that town and surrounding municipalities, said Father Vasquez, pastor of St. Therese of the Child Jesus Parish in Datu Piang.

If ordinary people knew it was going to happen, the authorities also must have known, he added.

On Nov. 24, Philippine President Gloria Macapagal-Arroyo declared a state of emergency over parts of the south, giving the military and police wide powers of detention and arrest.

Mangudadatu was not in the convoy at the time of the attack. He told authorities his wife, Genalyn, called him by mobile phone moments before she and her entourage were abducted. She said 100 men had surrounded the convoy before the line went dead, according to reports.

By Nov. 24, government troops had found at least 46 bodies.

Mangudadatu, deputy mayor of the town of Buluan, said there had been rumors of an ambush and he had sent the women because he believed they would not be harmed.

He accused Zaldy Ampatuan, governor of the Autonomous Region in Muslim Mindanao and an ally of Arroyo, of masterminding the killing. Mangudadatu says his female relatives were raped and beheaded.

At least 12 journalists covering the elections were also killed, including Neneng Montano of the Catholic Media Network, said the Catholic Bishops’ Conference of the Philippines.