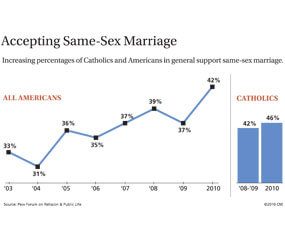 WASHINGTON – More Americans, including Catholics, now say they favor allowing same-sex couples to marry than did a year ago, according to surveys conducted by the Pew Research Center.

Polls conducted between July 21 and Sept. 6 found that a plurality of Catholics – 46 percent to 42 percent – approved of allowing gays and lesbians to marry.

In similar polling in 2008 and 2009, the number of Catholics favoring same-sex marriage stood at 42 percent with 45 percent opposed.

The polls were conducted in two separate periods for the Pew Research Center for the People & the Press and the Pew Forum on Religion & Public Life. The margin of error was plus or minus 1.5 percentage points.

Support for same-sex marriage has grown gradually since the Pew Research Center began surveying attitudes on the issue in 1996. Then, just 27 percent of Americans supported marriage among gays and lesbians.

Catholic teaching holds that marriage is a covenant between one man and one woman directed to the good of the spouses and the procreation and education of children. The church has opposed efforts across the country to legalize same-sex marriage and supported ballot initiatives to define marriage as the union of a man and a woman.

The bishops’ Ad Hoc Committee for the Defense of Marriage works to promote church teaching on marriage.

Richard McCord, executive director of the U.S. bishops’ Secretariat of Laity, Marriage, Family Life and Youth, could not be reached for comment on the survey results.

Pew researchers reported that the shift in responses since the 2008-09 survey reached across demographic, political and religious groups.

Bradford Wilcox, director of the National Marriage Project at the University of Virginia, told Catholic News Service Oct. 7 that he expects the trend of growing support for nontraditional marriage to continue into the future, especially among young adults.

“At the same time, when you ask Americans where the best place for a child to be raised, that being by their biological mother and father, overwhelming majorities of Americans would support that notion,” he said.

“There is a notion to be tolerant of family diversity on one hand and a desire to support a particular model of (traditional) family life,” Wilcox added. “Depending on the kind of question you pose with the American public, you’ll get an answer more consistent with a traditional view of marriage as opposed to support for same-sex marriage.”

Among Catholics, those who attend Mass less than weekly, whites, people under 50 years old and women supported same-sex marriage at significantly higher rates than people who attend Mass weekly, minorities, people 50 and older, and men, according to the survey results.

Weekly Massgoers reject same-sex marriage by 55 percent to 34 percent. In comparison, 59 percent of Catholics who attend Mass less frequently support such marriages as opposed to 31 percent who oppose them, the survey found.

Hispanic Catholics were more evenly divided on the issue with 43 percent opposed and 42 percent in favor of same-sex marriage.

A similar increase in support for same-sex marriage since the last survey was reported among white mainline Protestants with a 49 percent to 38 percent plurality offering approval. The results represent a significant change from polling in 2008-09 when 40 percent approved and 49 percent opposed such marriages.

Researchers also found that same-sex marriage ranked at the bottom of a list of 13 issues voters are considering in November’s congressional elections. Not surprisingly, the economy (90 percent) and jobs (88 percent) were considered the most important issues by those surveyed.

Another survey released in October reflected a significant change in attitudes toward same-sex marriage over the past five years.

Data from the American Values Survey, the third such biennial survey by the Public Religion Research Institute, found 37 percent of Americans support same-sex marriage and 27 percent support civil unions, with 25 percent of the public saying their views on the issue have shifted in the past five years.

With the passage of Proposition 8 in California in 2008, same-sex couples married between June and November 2008 remain legally married, but no new legal marriages can be performed. The voter-led initiative remains under appeal in the California court system.