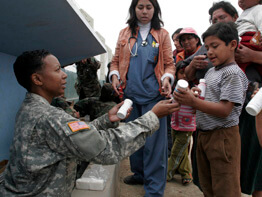 LIMA, Peru – When a violent earthquake shook southern Peru in 2001, it jolted the Ica River out of its bed, flooding part of the city of Ica and forcing Celinda Terrones and her children to spend the night on the roof of their house.
When a magnitude 8 quake struck Aug. 15, however, their former refuge turned deadly.
The initial tremor swelled to a rolling shudder, buckling the walls of their adobe dwelling. As Terrones and her family fled, her adult daughter fell while carrying her 5-year-old son. The daughter stumbled and fell in such a way as to try to protect her son, and falling bricks battered her arms.
Then they were in the street, watching as the roof caved in.
“Everyone ran out of their houses screaming and holding their children,” Terrones said. “Our house just collapsed.”
Although aftershocks made the work dangerous, she and her daughter scrabbled through the rubble, salvaging what little they could. Then they stood guard to keep looters at bay.
“We spent the night in the street,” she said. “The house is completely uninhabitable.”
On her block, neighbors rigged up makeshift shelters of straw mats so they could stay near their homes.
Terrones’ family was one of the luckier ones. Although they lost nearly all their possessions, they survived. At least 540 people died, more than 1,500 were injured and tens of thousands were left homeless by the disaster.
More than $40 million in aid and supplies poured into the country over the next few days, but the victims complained that assistance was slow in coming.
“There is no water,” Terrones told Catholic News Service by telephone the night of Aug. 17. “Some shops are still standing, but they are closed because people are looting.”
Late that afternoon, she finally had received a bottle of drinking water from an emergency post in the soccer stadium. The local parish had delivered a bag of wheat, which was cooked in a common pot and shared among the 42 families in Terrones’ neighborhood.
Meanwhile, rescue workers in the towns of Ica, Pisco and Chincha searched for survivors and pulled bodies from the rubble. By late on Aug. 19, officials had given up hope of finding more survivors.
Old adobe churches in the three towns could not withstand the tremors. About 150 people died when St. Clement Church in Pisco collapsed during Mass. On Aug. 18, rescuers pulled a 10-month-old boy alive from the ruins.
In Ica, the floodwaters in 2001 spared the church housing the image of the Lord of Luren, a popular religious devotion. This time the sanctuary was heavily damaged, but the image was intact. It was taken out of the church for an outdoor Mass on Aug. 17, Terrones said.
In the affected cities, shipments of coffins arrived and grieving families buried their dead in hastily dug graves.
Over the weekend, officials set up distribution points in the cities for emergency supplies. Workers also labored to reopen the Panamerican Highway, which links Pisco and Ica with Lima, the Peruvian capital. Southbound traffic from the capital was routed over one lane of a damaged bridge, while northbound traffic was forced to ford the shallow river.
At one point, when the bottleneck backed up traffic for several miles, looters raided trucks carrying water and relief supplies. Military troops were called in to establish order.
President Alan Garcia blamed the initial delay in the emergency response on the lack of electricity, which made pumping water impossible. By late Aug. 19, electricity was restored to only about 20 percent of the area, but generators had been hooked up to water pumps.
Garcia announced that families who lost relatives would receive financial assistance for burial costs, and those whose homes were destroyed would receive about $1,900 to help them begin to rebuild. The president also pledged that young people from the affected areas would be hired to do cleanup work and said $31.7 million had been earmarked to rebuild infrastructure.
While Pisco, the city closest to the epicenter of the earthquake, was hardest hit, in the days following the quake the scope of the disaster began to become clear.
Landslides blocked the highway leading from Pisco to Ayacucho, in the central highlands. There were reports of houses damaged or destroyed in rural areas, and the official disaster area was expanded to include the department of Ica, the southern part of the department of Lima and part of the highland department of Huancavelica.
Garcia said army helicopters would shuttle relief supplies to remote areas.
In Lima, there was an outpouring of solidarity with the victims of the disaster. Donors gave blood, radio and television stations aired messages from anxious callers trying to locate relatives, and businesses and district governments set up tents to collect donations of nonperishable food, bottled water, clothing, blankets and other supplies.
The national soccer station was jammed as hundreds of volunteers sorted through donations. And in Villa El Salvador, a sprawling, low-income neighborhood in southern Lima, the local government collected a truckload of supplies from residents who gave of the little they had to help strangers who were even less fortunate than they.