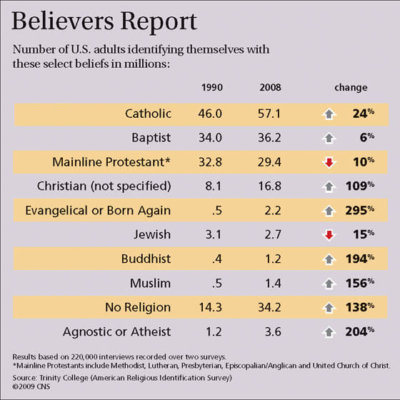 WASHINGTON – A new survey shows the percentage of U.S. residents who identify themselves as Catholics has declined, but Catholicism remains the largest denomination in the country.

Trinity College of Hartford, Conn., released its third American Religious Identification Survey March 9. The survey also found that the U.S. Catholic population has shifted away from the Northeast toward the Southwest, the percentage of Latinos in the U.S. Catholic Church has grown and the number of U.S. residents claiming no religion has increased dramatically.

Most of the Christian population growth came from people who identify themselves only as Christian, evangelical/born again, or nondenominational Christian.

Stephen Schneck, director of the Life Cycle Institute at The Catholic University of America in Washington, told Catholic News Service March 10 the biggest surprise in the survey for him was the surge in the number of Americans who don’t identify with any religion.

“As a trend, I think it’s accelerating at a faster rate than any of us expected,” Mr. Schneck said. “To a certain extent, it’s a trend we can expect to continue to see happen. The erosion most noticeable is with young people.”

The percentage of Americans who claimed no religion has jumped from 8.2 in 1990, the year of the first American Religious Identification Survey, to 14.2 in 2001, the year of the second one, to 15 in 2008, according to the third survey, which was conducted by Trinity’s Program on Public Values between February and November 2008. Surveyors questioned 54,461 U.S. adults in the 48 contiguous states by telephone.

The research methodology was identical to that used for the 1990 and 2001 surveys and questioned the adults in either English or Spanish. The margin of error was less than 0.5 percent.

Ninety percent of the decline came from the non-Catholic portion of the Christian population, most significantly from the mainline Protestant denominations, which include Methodists, Lutherans, Presbyterians and Episcopalians/Anglicans.

Though the number of U.S. adults who identified themselves as Catholics increased by 11.1 million since 1990, the percentage of Catholics in the general population dropped by about a point to 25 percent.

Nonetheless, Catholics remain the largest religious group nationally, with 57 million people identifying themselves as members of the church.

Catholics, however, are on the move, with their population shifting in the U.S. away from the Northeast toward the Southwest.

“The decline of Catholicism in the Northeast is nothing short of stunning,” said Barry Kosmin, a principal investigator for the 2008 survey. “Thanks to immigration and natural increases among Latinos, California now has a higher proportion of Catholics than New England.”

The population shift among Catholics is the result of two factors, Mr. Schneck said.

“There is an erosion of white Catholics in the Northeast and we’re seeing more Hispanic Catholics in the South and Southwest,” he said. “The future of the church in the United States is with the Latinos. It’s going to be a Latino church before long. I’m 55 and I believe the American Catholic population will have a Hispanic majority in my lifetime.”

Other key findings include:

– Baptists, who constitute the largest non-Catholic Christian faith, increased their numbers by 2 million since 2001, but continue to decline as a proportion of the population.

– Mormons increased in numbers enough to hold their own proportionally, at 1.4 percent of the population.

– Numbers in Eastern religions such as Buddhism more than doubled in the 1990s, but in 2008 declined slightly, to just under 2 million. Asian-Americans are significantly more apt to specify no religious identity than other racial or ethnic groups.

– Only 1.6 percent of Americans call themselves atheist or agnostic. However, based on avowed beliefs, 12 percent are atheist (believe there is no God) or agnostic (unsure if there is a God), while 12 percent are deistic (believe in a higher power but not a personal God). The number of outright atheists has nearly doubled since 2001, from 900,000 to 1.6 million. Twenty-seven percent of Americans do not expect a religious funeral at their death.

– Devotees of new religious movements, including Wiccans and self-described pagans, have grown faster this decade than in the 1990s.