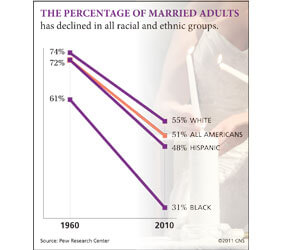 WASHINGTON – With cohabitation, single-person households and single parenthood on the rise, the percentage of Americans who are currently married has reached an all-time low.

A new report from the Pew Research Center analyzing Census Bureau data found that only 51 percent of Americans 18 and over were married in 2010, compared with 72 percent in 1960. Among Hispanics and African-Americans, the decline is even more steep.

“If current trends continue, the share of adults who are currently married will drop to below half within a few years,” said the report by Pew senior writer D’Vera Cohn, senior demographer Jeffrey S. Passel and research associate Wendy Wang.

The authors said it was “beyond the scope of this analysis to explain why marriage has declined,” but they noted that its popularity has fallen less sharply among college graduates. They said a recent drop in the number of new marriages could have to do with the economic recession, but the linkage “is not entirely clear.”

Reinforcing the trend of a rising median age for marriage was the percentage of Americans ages 20 to 24 who had ever been married. In 1960, 60 percent of that age group had married, while in 2010 only 14 percent had.

The responses also differed according to age group and racial and ethnic groups. While only 32 percent of Americans 65 and older said marriage was becoming obsolete, 44 percent of those 18 to 29 said so.

But even if unmarried Americans believe marriage is becoming obsolete, many still want to get married themselves, according to the survey results.

The only unmarried group that indicated they did not want to marry were those who had been married previously. Just over a quarter (26 percent) of adults who had ever been married but were currently unmarried said they wanted to get married.

No margin of error was given for the survey portion of the report.

But a separate report issued earlier in 2011 by the Institute for American Values found that about 40 percent of U.S. couples who are divorcing said one or both members of the couple were interested in the possibility of reconciling.

William J. Doherty, professor of family social science at the University of Minnesota, and Leah Ward Sears, former chief justice of the Georgia Supreme Court, were the principal authors of the new report, titled “Second Chances.”

They also found that a modest reduction in divorce would benefit more than 400,000 U.S. children each year and could produce significant savings for U.S. taxpayers by reducing the costs of social welfare programs needed because of the effects of divorce on poverty.

The authors proposed model legislation for state legislatures that would:

– Extend the waiting period for divorce to at least a year.

– Require pre-filing education, with modules on reconciliation and on a nonadversarial approach to divorce, for parents of minor children considering divorce.

– Create university-based centers of excellence to improve the education available to couples at risk of divorce.