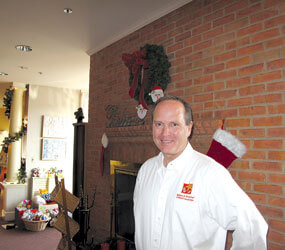 Brian Morrison is the founder

As Brian Morrison walked around the Children’s House at Johns Hopkins Children’s Center in Baltimore, a woman emerged from a room. She overheard Morrison talking about the services his organization, the Believe In Tomorrow Children’s Foundation, provides for the house.

“This place is a blessing,” the woman interjected. “I don’t know what we’d do without it.”

Believe In Tomorrow has provided affordable hospital and respite housing services to critically ill children and their families across the country since the 1980s. It offers innovative, distractive techniques for children enduring often painful procedures.

Morrison, a parishioner of St. Mark in Catonsville, is founder, president and chief executive officer of the foundation.

Prior to Believe In Tomorrow, Morrison worked for the University of Maryland system as a writer covering Maryland Shock Trauma. In that job, he saw children in the pediatric cancer clinic.

“I was immediately drawn to do something,” he said. “I was always curious about ways to address needs that weren’t being addressed.”

Morrison became so involved in the cause that he left his job to start Believe in Tomorrow fulltime. His wife, Mary, was dedicated in the early days to the organization, but as it grew, stayed at home to raise their five sons – Ryan, Sean, Brendan, Kevin and Connor.

“Mary has been an extraordinary mother to our five sons,” Morrison said. “Often the many responsibilities of parenting were on her shoulders as I was busy with Believe In Tomorrow. “Over the years Mary has made many sacrifices that have contributed to the success of Believe In Tomorrow.”

St. Mark Parish was, and is, the center of the family’s life.

Mary, an administrative assistant at St. Mark School, said of the parish: “It’s like we’re a family. We go to church together, school together and play sports together. We do everything together.”

“They’re extremely trustworthy,” he said. “All of this is generated from mom and dad. They’ve done a phenomenal job. They’re both very humble people … a dynamic force.”

Like his sons, Morrison attended St. Mark School. He attributes his foundation’s mission to the education he received and his faith.

“I do believe that God has a guiding hand in all such efforts,” Morrison said. “I look back on our moments of growth that were quite extraordinary and realize there was a larger plan in place to make everything happen at that point and time.”

Morrison threw his energy into Believe In Tomorrow, which expanded to Delaware, Florida, North Carolina, South Carolina and Texas. Many of its houses are in beach or mountain towns, allowing for rest and relaxation. The North Carolina facility, which houses military families, debuted in 2010.

Military family life is personal for the Morrisons. Brian and Mary’s son, Ryan, has been deployed as a Marine helicopter pilot for the last year. He missed the birth of his daughter, Madison, but is expected to come home early in 2012.

In addition to its children’s house at Johns Hopkins, Believe In Tomorrow has another Baltimore presence at St. Casimir in Canton.

In 2006, the parish’s former convent became the only stand-alone facility that houses pediatric bone marrow transplant patients and their families. The spacious apartments allow post-transplant patients, who have to stay within 15 minutes of their hospital for up to four months, to live comfortably.

Morrison continues to be thankful for Believe In Tomorrow’s numerous volunteers, staff and benefactors who have helped the organization assist so many. The mission remains in the forefront of their minds.

“There’s never been a holiday season,” Morrison said, “that I don’t think about the significance of Christmas, what it means and the fact that we have so many families in tremendous need.”