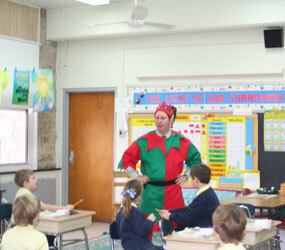 The students of St. Joseph School in Cockeysville reached out to Our Daily Bread, and in turn received a treat themselves.

Every Thursday, a group of St. Joseph middle-school students begin their day by making sandwiches for the Baltimore soup kitchen. Teacher Mark Miller dyed his hair pink after they met his challenge of preparing 600 sandwiches, which led to another “photo op,” this one involving Terrance Golden, the principal.

He challenged students to prepare 750 sandwiches in one setting, and when they produced 1,071 Dec. 8, he made good on his promise to don an elf costume and visit every classroom, which he did Dec. 12.

“While the motivation of seeing me in elf gear is all in good fun,” Golden said in a news release from the school, “the goal is to serve more sandwiches to hungry people at Our Daily Bread. What better way to get into the holiday spirit than that?”

The school’s choir, under the direction of Isabel Blevins and David Pomplom, planned for a busy Dec. 21. It was to perform on WBFF Fox 45 and then visit the School Sisters of Notre Dame at The Villa on Bellona Avenue.

From Garrett County to St. Veronica Parish in Cherry Hill, the Maryland State Knights of Columbus Council donated more than 630 new coats to children in need.

“The interaction between the Knights and the children receiving the coats was very special,” said Cathy McClain, executive director of Cherry Hill Trust, Inc.