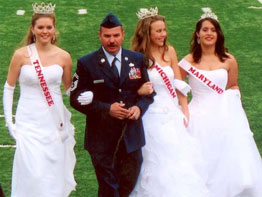 Ashley, a senior, was one of 150 chosen from 4,000 national applicants to participate. The parade and game were televised on ESPN.

Ashley serves as the school’s student government president and participates in the Spanish Honor Society, Student Ambassadors, Art Honor Society, and for the second year, the National Honor Society. She volunteers at a local fire department and hopes to attend an engineering college in the fall.

Austin Asbury, a sixth-grader at St. Clement Mary Hofbauer School in Rosedale has been published in the Jan. 12 issue of Sports Illustrated after writing a letter to the editor.

Austin’s letter addressed the leadership skills of Florida Gators quarterback Tim Tebow. He was prompted to write the letter as part of a communications merit badge through his Boy Scout Troop 810.

Father Joseph L. Muth Jr., pastor of St. Matthew, Northwood, was among those sworn in by Gov. Martin O’Malley as members for the newly established Maryland Council for New Americans.

The governor had signed an executive order creating the council to assist governor and state agencies in maximizing immigrant integration into Maryland.

“Given today’s economic climate, it is vital that we integrate new American families into Maryland’s workforce and civic life,” said Gov. O’Malley.

The Council for New Americans will consist of a partnership between public, private and civic sectors.

Ethan presented the table to Mr. Ader the day before the Ravens battled the Tennessee Titans in a divisional playoff game.

Sister Catherine Phelps, a Sister of Notre Dame de Namur and principal of Trinity School in Ellicott City, has announced a fall 2009 opening of new preschool and pre-kindergarten programs. Barbara Law was appointed as program director; she currently serves as director of Trinity’s extended day program. A half-day open house was held Jan. 19 to accept registration and to introduce the program.

Pack-a-Lunch Day is part of the ongoing service program at St. Pius X School, Rodgers Forge. On the third Wednesday of each month students are encouraged to pack an extra lunch, and those lunches are collected at the door and driven by parent volunteers to Beans and Bread Outreach Center in Fells Point.

The school provides the lunch bags, and most students decorate them as part of their homework. Pack-a-Lunch averages 250-275 bags monthly and includes the collection of peanut butter, jelly and plastic bags – always needed items at Beans and Bread.

Pat Sprankle, coordinator of youth ministry at St. Louis, Clarksville, published his first book, “Crawling in the Dark,” for young adults struggling with issues of doubt and faith.

The book can act as a guide to those who have found themselves “in the darkness so deep and black that you cannot see your hand before your eyes,” as the publisher promotes it online. In a candid, caring style, the book sheds light on a young person’s faith journey. Published by Wyndham Hall Press, this title is available online for $24, or discounted to $21.20 from the youth ministry office: St. Louis, 12500 Clarksville Pike, Clarksville, MD 21029. For more information, call 410-531-6668 or e-mail sprinkles88@verizon.net.

The St. Agnes Foundation has reached a critical milestone in its capital campaign, with $11.8 million in pledges and donations. An additional $1 million has been invested in the construction of Hackerman-Patz House. The total monies represent more than half of the foundation’s $25 million goal.

It is the first capital campaign in the hospital’s 146-year history.

Staff members from Mercy Medical Center, Baltimore, are now visiting My Sister’s Place Women’s Center each month to provide dinner, camaraderie and support to 50 women and children, and eventually will expand to twice monthly.

The newly revamped center is a comprehensive resource facility for homeless and impoverished women and children in Baltimore.

Mercy’s Human Resource staff is committed to the project and will fill 58 volunteer slots; two more volunteers hail from the radiology department. All employees donate their time off the clock.

PEOPLE, PLACES, THINGS items for consideration should be e-mailed to ssingleton@catholicreview.org.