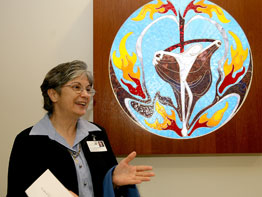 As part of the hospital’s multi-phase revitalization and expansion project, local artists’ work has been featured, most recently Marty Murphy, who creates these one-of-a-kind stained glass pieces in his Catonsville home studio.

The Loyola Blakefield Swimming and Diving Team Charity Swim took place Dec. 22-23 on the campus as the team completed a 100-mile relay for the 12th consecutive year. Since its inception, the team has donated tens of thousands of dollars to charity, including Johns Hopkins Bayview Burn Center, Cristo Rey Jesuit High School in Baltimore, Ronald McDonald House, and others.

To honor the memory of the late Suzanne Vinyard, mother of teammate Ken Vinyard, the swimming and diving team chose to raise funds for the breast cancer program at the Sidney Kimmel Comprehensive Cancer Center at Johns Hopkins, which provided support to Mrs. Vinyard during her battle with breast cancer.

The team camped out in Knott Hall for more than 24 hours until they completed swimming the 100 miles.

St. Peter the Apostle/St. Peter at the Lake in Oakland is building a new Mass station and seeks a crucifix and other items such as cruets, a gift table and chalices. To help, contact the pastor, Father Don Parson, or Donna Cook, secretary, at 301-334-2202.

College of Notre Dame of Maryland was the answer to a Double Jeopardy question on “Jeopardy!” as the first question in the category “Women’s Tuition.” The question:

“This college in Maryland doesn’t have fighting Irish on the gridiron but their Gators are tough in field hockey.”

While none of the contestants ventured an answer, the college received significant national visibility on a program watched by millions.

The newest ship visitors to join the Apostleship of the Sea (AOS) crew is Andy Middleton, a parishioner of Our Lady of Mount Carmel, Essex, where his five children attend school.

Several ship visitors are active at least once a week; two volunteer twice a week; and 10 visit ships once a month. AOS seeks more men and women to visit ships docked in Baltimore ports as a welcome Catholic beacon, providing religious icons and prayer cards, reading material, taking seafarers on errands and otherwise integrating Catholicism and Christianity into the lives of those at sea.

A St. Agnes Hospital physical therapist, Linda Horn, was awarded the 2008 Henry O. and Florence P. Kendall Award from the Maryland Chapter of the American Physical Therapy Association for her outstanding service to the profession of physical therapy in the areas of patient care, supervision, administration, and education. Ms. Horn has been a neurologic certified specialist since 1993.

The St. Agnes Foundation announced a scholarship program for the children of employees in which they will be offered tuition discounts and scholarships to The Seton Keough High School and The Cardinal Gibbons School, both in Baltimore.

The foundation and the schools will equally fund the $1,500 scholarships in $500 increments, with additional enrollment development support from The Knott Foundation.

“We are truly excited about this opportunity,” said Sister Patricia Bossle, president of Seton Keough, “and we are hopeful that other Catholic schools and hospitals in the region will forge similar partnerships to offer students in their communities a chance at a great education.”

To obtain an application contact Gibbons admissions office at 410-644-1770. The program will begin in February.

Several graduates of Calvert Hall College High School, Towson, have been featured in the news: Mark Del Gallo, class of 1997, assistant to movie writer/director/producer Frank Miller, earned the role as Seth in the movie “The Spirit” which opened in theaters Dec. 25. Working with Mr. Miller for the past two years during the filming and promoting of this film has given Mr. Del Gallo the opportunity to visit Europe and travel with stars Samuel L. Jackson, Eva Mendes, and Scarlett Johansson.

The late Dustin Bauer, class of 2004, who died in March 2008 after a tragic accident at Mount Saint Mary’s University, Emmitsburg, was honored along with 37 other organ-, eye- and tissue-donors who in their passing saved, healed, and gave hope to thousands of people in need.

Mr. Bauer’s likeness was transformed into a floragraph that adorned the Donate Life float in the 2009 Tournament of Roses Parade in Pasadena, Calif. Jan. 1. Visit Living Legacy Foundation at www.thellf.org.

Scott Krieger, class of 2005, a senior left-fielder for George Mason University, has been selected to the Preseason All Ping! Baseball second-team, the only Colonial Athletic Association player to make the first, second or third teams.

Items for consideration for PEOPLE PLACES THINGS should be emailed to Suzanne Molino Singleton at ssingleton@catholicreview.org.