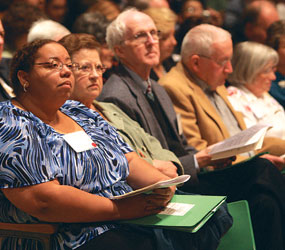 “We’re trying to gain some social justice consciousness for our parish Hispanic pastoral council and to learn how to act on the various problems in the Hispanic community.” Perulta said. “Right now, the biggest problem is family and particularly the separation of families through deportation.”

Hundreds of concerned Catholics attended the convocation, which offered workshops and keynote speeches in both English and Spanish-language tracks. Workshop topics included housing, immigration, domestic and global poverty and human dignity in the workplace.

The convocation, which had a theme of “Economic Justice for All: A Call to Discipleship in Troubled Times,” also honored numerous Archdiocese of Baltimore parishioners with awards for service to the community.

Archbishop Edwin F. O’Brien led a prayer service and asked attendees: “Is economic justice happening for all? Can we become a community of believers rooted in discipleship of Jesus and explore faith-filled ways of helping those who go without?”

The archbishop told attendees that economic justice was a considerable dilemma and later added that Jesus’ resurrection propels those in ministry to do greater work.

The event came as the Catholic Church celebrates the 25th anniversary of the United States Conference of Catholic Bishops’ pastoral document, “Economic Justice for All,” which addressed social teaching and the nation’s economy.

Jesuit Father John Donohue, a key scriptural contributor to that document, was the English keynote.

Monsignor William H. Burke, a member of the convocation’s planning committee, told The Catholic Review before the event that the document is perhaps more relevant in 2011.

“The gap has widened between the rich and the poor … you still have people out of work and banks hanging on to money, which is making it difficult for small business to grow and expand,” the pastor of Baltimore’s St. Francis of Assisi said.

Monsignor Burke said the convocation is meant
to be motivating and encouraging.

Juan el Bautista Aguilar, a parishioner of St. Mary’s in Annapolis, was among those inspired to create change.

“It’s important to be united and together to re-enforce the trust amongst Latinos,” he said. “If we’re together and united, we can do bigger things. We can talk about the different issues and the solutions that are out there.”