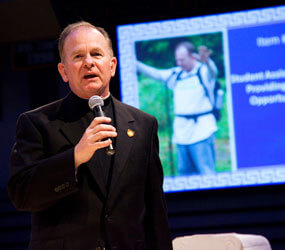 WASHINGTON – House Minority Leader Nancy Pelosi has dropped her objections to House Speaker John Boehner’s intended nomination of an Oregon Jesuit priest as the next chaplain of the U.S. House of Representatives.

A spokesman for Pelosi, a Baltimore native, said late May 11 that Jesuit Father Patrick J. Conroy “has responded to additional questions posed to him” by the California Democrat. Pelosi had expressed concern that Father Conroy belongs to the Oregon province of the Society of Jesus, which agreed in March to pay about $166 million in settlements to 500 people who have sought damages for abuse they said they suffered under Jesuits at schools and parishes in the Northwest.

“Based on his answers, the Leader sees no obstacle to him being named chaplain,” said spokesman Drew Hammill.

Father Conroy has not been accused of any involvement in the sexual abuse of minors or any cover-up of such abuse.

Hammill told Catholic News Service earlier May 11 that Pelosi was reviewing “new information” about Father Conroy “just as expeditiously as possible as we have with all other materials provided by Speaker Boehner’s office. There is no prejudgment of this new information.”

Boehner spokesman Michael Steel told Roll Call in an email, “The settlement is public knowledge, reported in The New York Times, among other media outlets. It was not part of the discussion because it has absolutely nothing to do with Father Conroy.”

Steel said both Boehner and Pelosi “reviewed Father Conroy’s background before the Speaker selected him. Father Conroy was honest and candid, and the Speaker is confident he will be a great chaplain for the entire House of Representatives community.”

Father Conroy, 60, currently works as a theology teacher, campus ministry assistant and coach at Jesuit High School in Portland and long served as a pastor to Native Americans in the Pacific Northwest.

If confirmed by the 435-member House, he would be the first Jesuit and only the second Catholic priest to serve as House chaplain. Father Daniel P. Coughlin of Chicago, House chaplain for the past 11 years, told Boehner last fall that he wanted to retire and left the post in April.

Father Coughlin contacted the U.S. Jesuit office in Washington, which in turn notified Jesuit provincials around the country. Each provincial put a man forward, including Jesuit Father Patrick Lee in Oregon, who asked Father Conroy, a lawyer who had been a campus minister at Georgetown for a decade.

In a statement released to the press May 10, Father Lee said he was “deeply disappointed to hear of the reaction of some people” to the nomination of Father Conroy, whom he called “an excellent priest worthy of the nomination made by Speaker Boehner.”

Father Conroy told the Catholic Sentinel, Portland archdiocesan newspaper, that he was unnerved when his provincial approached him last fall about the possibility. But as time passed, the excitement and glamour turned to a feeling of peace, which Father Conroy said is a classic sign in Jesuit spirituality that a decision was right.

Jesuit spirituality, based on the 16th-century writings of St. Ignatius of Loyola, centers on making good decisions. That could fit well in the business of the House of Representatives, Father Conroy said.

“I would hope I’d be able to remind everyone what they’re about,” he said. “They are not about winning something so someone else loses, but winning so everyone wins. They are there to serve, not to gain glory.”

He imagines most of his work will happen in one-on-one conversations. He said he aims to help House members and staff discern which urges are coming from God and which are coming from them.

“You need to know the difference,” the priest said.

The House chaplain earns $167,800 a year, according to the Congressional Research Service. As a member of a religious community, Father Conroy does not keep his salary, but turns it into a common fund for Jesuit life and ministry.

At Jesuit High since 2004, he has served as superior of the Jesuit community, teacher of freshman and sophomore theology, assistant coach of the junior varsity softball team, campus ministry assistant, member of the school’s board of trustees, chaplain to athletic teams and director of freshman retreats – where he is known for his guitar playing around the campfire.

“He is a man of the world and a spiritual man,” said Greg Allen, chairman of the religion department at Jesuit. “He challenges kids to show up, to be present. He tells them that they matter, that their presence at retreats and liturgy matters and, in a sense, he tells them to show up in the world.”

“Father Conroy has been significantly involved in the daily life of Jesuit, and his legacy at our school will be enduring,” said John Gladstone, president of the Southwest Portland school.

American lawmakers have had a chaplain since 1774, when the Continental Congress chose an Episcopalian priest to open its legislative sessions with prayer. In 1983, the U.S. Supreme Court upheld the role of chaplains in Congress.

Father Coughlin was chosen in 2000 as the first Catholic chaplain after an imbroglio that included charges of anti-Catholicism. But the controversy faded and Father Coughlin told CNS in 2005 that his work on Capitol Hill was the “balance of contemplation and action, prayer and reflection, words and listening” he had longed for his whole life.

Contributing to this story was Ed Langlois in Portland.