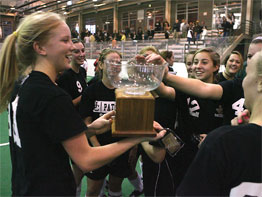 Midway through the IAAM A Conference indoor soccer season, Gary Lynch, head coach for The John Carroll School in Bel Air, told The Catholic Review that his Patriots were at a clear disadvantage since they play indoor with the same offensive and defensive mindset as they have playing outdoor soccer.

On Jan. 9 at Clarence “Du” Burns Arena, Canton, the Patriots (8-1-2) entered their first IAAM championship finals game in the indoor program and played their entire game as if it were on an outdoor pitch. The outcome was festive for the Patriots, who defeated the defending champions from Maryvale Preparatory School, Brooklandville, 5-3.

And while the defending champions from Maryvale (7-3-2) were making those sharp, quick, triangle passes and effectively using the sideboard to advance the ball up field, the Patriots were strong-footing passes up field and cutting toward the goal. This year, advantage the John Carroll School, giving the IAAM three different champions in as many years.

Coming into the weeklong, single-elimination tournament, the Patriots were seeded second. They handily defeated Roland Park Country School and Friends Schools before facing the fourth-seeded Maryvale Lions, who defeated St Paul’s School for Girls in the quarterfinals and upended the top-seeded Institute of Notre Dame Indians to get into the championship game for a second straight season in the A Conference. Prior to that, the Lions were dominant year after year in the B Conference.

From the opening play, the Lions controlled the tempo and the time of possession. Scoring first was Maryvale junior Sophia Thomas, and then came Lauren Federline with another. Both players are top offensive threats in both the indoor and outdoor programs.

Knotting it at 2-2 by halftime, the Patriots came out firing, with another goal from junior Brittany Dashiell and two more from junior Paige Hollenback. In fact, in the second half of play, the Patriots scored three times in six minutes.

Despite a second goal from Maryvale’s Thomas, the momentum had swung towards the Patriots’ side of the field. The Lions never gave up, always looking to get back into the game. Billy Reinhardt, the Lions’ head indoor and outdoor coach, said, “You know, our girls accomplished a lot with championships in five out of six years. We have a lot to be proud of.”

“The girls were nervous coming into today’s game,” said Heidi Weaver, Patriots’ assistant coach. “Coach Lynch told them that this is just another game. It’s been so nice for our girls to see how far they’ve come. We are just really proud of them.”