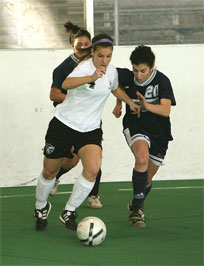 With only a handful of varsity players and a majority of junior varsity players, John Carroll School’s indoor soccer program (5-1-2 as of Jan. 14) is in the hunt for the IAAM A Conference championship, just three weeks away.

Patriots Head Coach Gary Lynch chuckled, saying, “We are definitely at a disadvantage in indoor since we play the same system as our outdoor teams.”

That may be true since the indoor game is so much faster, but the Bel Air team is improving its indoor game each season. The Patriots hope for a look at the title in 2008, despite another strong season from defending champs Maryvale Preparatory School, Brooklandville, and 2007 runner up, Institute of Notre Dame, Baltimore.

Lynch said that top contributions are coming from junior Brittany Dashiell, who controls the center and in doing so, controls the tempo; senior Jenna Quaranta who serves as the Patriots’ offensive playmaker; and sophomore Jenn Etzel, whose defensive prowess is holding teams to three and four goals per game while the Lady Pats are netting an average of five and a half goals per game.

It is challenging for Lynch to run all 22 players on the roster in each contest, but with a few outside games and a few junior varsity contests along the way, the program continues to thrive.

With minimal practice time, Lynch is happy with where his team stands at present, with a lone league loss to IND and ties to MVP and Baltimore Lutheran.