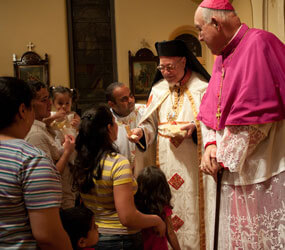 “I think that (the people) are afraid,” said Cardinal Naguib during a recent visit to Nashville. The revolution has provided a historic opening for equality and freedom for people of all faiths in Egypt, but the prospects for Christians depend on the future government, he added.

“At the same time we have much hope it will be better than before,” Cardinal Naguib said.

The cardinal is the leader of the Coptic Catholic Church, based in Egypt and one of the Eastern Catholic churches.

While most of the world’s Coptic Catholics live in the African nation, many have immigrated to nations around the world. During a visit to the United States Cardinal Naguib stopped in Nashville July 22-25 to meet the local Coptic Catholic community.

Egypt’s total population is about 86 million, the vast majority of whom are Muslim. Christians account for about 8 million of that number, Cardinal Naguib said. There are about 250,000 Coptic Catholics and about the same number of Protestants in Egypt, and the rest of the country’s Christians belong to the Coptic Orthodox Church, Cardinal Naguib said.

Christians are denied access to holding top positions in some sectors of Egyptian society, he explained, such as the police and army. Some universities also refuse to accept Christians and some positions in the medical and legal fields are barred to Christians, he said.

The Egyptian government also places restrictions on Christian churches that make it difficult for them to grow, according to Cardinal Naguib.

“The society still lacks security,” Cardinal Naguib explained, and Christian churches have been attacked since the revolution. Most of the violence has been targeted at the Coptic Orthodox churches, and only one Coptic Catholic church has been attacked, he said.

Egyptians are facing several important elections, including one for president and another on a new constitution, Cardinal Naguib said.

After the revolution, Islamist parties that were already well organized and active, such as the Muslim Brotherhood, were able to fill a political vacuum, Cardinal Naguib said. But the groups that led the revolution are not organized and need time to organize before the elections, he said.

“The situation in Egypt is not clear at all,” he said. “We are living in a very critical period.”

He praised Pope Benedict XVI for having “the courage to call on Arab countries to protect their Christian minorities.”

The Coptic Catholics in Egypt also are “very grateful to the U.S. Catholic Church and the government for the support they are giving,” Cardinal Naguib said.