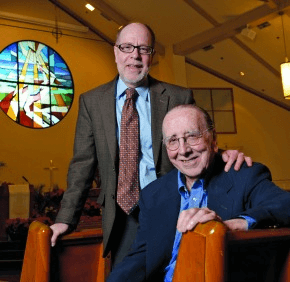 By Paul McMullen
pmcmullen@CatholicReview.org
Twitter: @ReviewMcMullen
“My calling,” Scott Rose insists, “is a synthesis of my family.”

“The only explanation,” his father counters, “is the Holy Spirit.”

To an observer, both appear right.

Al Rose was ordained a permanent deacon for the Archdiocese of Baltimore in 1989. His son, Scott, will undergo the same rite in Baltimore at the Basilica of the National Shrine of the Assumption of the Blessed Virgin Mary May 21.

While the clergy rolls in the archdiocese include other father-son combinations, the Roses are the first to be ordained permanent deacons here.

As he said, Scott Rose is indeed the middle branch on a family tree that exemplified mercy well before Pope Francis called for a year to do so.

When his son, Austin, isn’t advancing his undergraduate work at The Catholic University of America in Washington, D.C., he’s on the southern border of the U.S., assisting immigrants.

His daughter, Aubrey, is a mitigation specialist with the Louisiana Capital Assistance Center, a non-profit which supplies legal assistance to those facing the death penalty.

Both began flexing their Catholic social justice muscles while students at St. John’s Catholic Prep in Buckeystown – Austin commuting to Baltimore to volunteer at the Esperanza Center, and Aubrey organizing an assembly on the death penalty that included Kirk Bloodsworth.

She had a direct connection to the man who is the Maryland face of the wrongly convicted. Before his death sentence had been overturned by DNA evidence, Bloodsworth had been ministered to behind bars by her grandfather, Deacon Al Rose.

A parishioner of St. Katharine Drexel in Frederick, Scott Rose is the CEO and general counsel of Frederick-based Way Station Inc., a mental health non-profit subsidiary of Sheppard Pratt.

His children reflect his service to the downtrodden, and his path to the diaconate was obviously inspired by his father.

Deacon Al Rose taught English literature at the U.S. Naval Academy and then Frostburg State University, where he began dabbling in campus ministry. In rapid order, he exited academia, moved with his wife, Abbie, to Baltimore, and began to work in prison and hospice ministry.

Why such challenging ministries?

“It isn’t taxing, if you are called to it,” said Al, who shrugged and elaborated when pressed. “Matthew, 25:35-42. ‘When did we see you a stranger and welcome you, or naked and clothe you?’

“Mother Teresa believed in that, literally. She believed that when she bathed emaciated, dying people she had gotten off the street, that she was touching the body of Christ. ‘Where were you when I was in prison?’ is the same thing.”

Asked about his father’s career change, Scott said, “What impressed me the most, it was this great leap of faith. He was the age I am now (56), and he didn’t think of it as retiring. I admired it, but I was surprised.”

His own path to the diaconate was equally circuitous. Baptized in the Episcopal church and raised Methodist, his mother’s faith, he converted only after his 1988 marriage to Mary Elizabeth Austin, a psychotherapist who does her own share of pro bono work. Out of the Catholic U. law school, Scott was working in Ohio, investigating child abuse, at the time of his father’s ordination.

He speaks compellingly about the toll among family members of those affected by mental illness, and those who care for them.

“People want to stay away from that which they fear,” Scott said. “We lose a lot of young people in this field. Family members, their sense of burnout. …”

This is his third discernment, as he had considered becoming a Methodist minister and then a Catholic priest.

“Before, I wanted to be special, rather than serve,” Scott said. “The third time around, it’s much more subtle.”

Despite directing an institution that serves more than 3,000 low-income adults and children, he was still looking for a way to do more.

“I didn’t have a spiritual context for my work,” he said. “When you use spirituality for compassionate purposes, it enriches the ministry. The more complex the situation, the more you have to talk about love.”

Father and son are among the collaborators on a book, “Fifteen Steps Out of Darkness, The Way of the Cross for People on the Journey of Mental Illness.” Their contribution was done gratis.

Scott spent his diaconate internship at St. Joseph-on-Carrollton Manor in Buckeystown. He began May in Israel, part of a 26-person delegation sponsored by the Weinberg Foundation.

His May 21 ordination will be paired with the transitional diaconate ordination of Kevin Ewing. The first reading and the Communion hymn will be offered by former unaccompanied minors assisted by the Esperanza Center, where he hopes to minister.