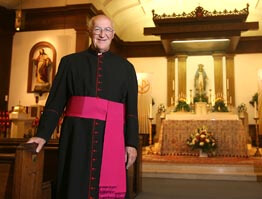 Monsignor Richard E. Parks was a sixth grader at the old St. Paul School in East Baltimore when a Franciscan sister asked him if he ever thought about becoming a priest.

As an altar boy who served daily Mass at St. Paul, the young student had been a constant presence at his parish – helping wherever he could with church and school activities. He even visited sick and shut-in parishioners for his pastor, letting them know when a priest would be stopping by to give them Holy Communion.

“When that nun said that to me, the idea stuck in my mind,” remembered Monsignor Parks, pastor of Sacred Heart of Mary in Graceland Park since 1982. “I was always hanging around the rectory. I got to know good priests. They had such dedication to their parishioners.”

Forty eight years after Archbishop Francis Keough ordained him to the priesthood, Monsignor Parks is preparing to retire July 1. A farewell liturgy will be celebrated at noon on July 8 at Sacred Heart of Mary, with a reception to follow.

Looking back on his many years of priestly service, the 75-year-old pastor said he has enjoyed every minute and hasn’t had one bad day.

“To me, every day is spectacular,” said Monsignor Parks. “It’s another opportunity to help God’s people.”

It was at Sacred Heart where Monsignor Parks served under Father Leon Warczynski, the man he would one day succeed as pastor and the priest who had been his primary inspiration as a youth.

Just as Father Warczynski served as an inspiration for his own vocation, Monsignor Parks was the inspiration for some of the future priests of the archdiocese. Bishop Mitchell T. Rozanski, eastern vicar, was one of those young parishioners who decided to enter religious life with the encouragement of his pastor.

Before being named pastor of Sacred Heart of Mary, Monsignor Parks served as pastor of Holy Cross in Baltimore from 1977-1982. He was also a chaplain for 10 years for the Baltimore City Fire Department, a ministry Monsignor Parks said allowed him to give back to the city he loved.

“People think firefighters are made of iron, but they’re not,” he said. “I helped them on the scene.”

One of Monsignor Parks lasting contributions at the largely Polish parish of Sacred Heart of Mary was the “polka Mass” – a liturgy celebrated every Thanksgiving Day that incorporates traditional polka music.

The priest also supported polka dance lessons at his parish, earning 35 dance certificates even though he never stepped on the floor. Once known as the “polka capital of Maryland,” the parish sometimes hosted as many as 40 polka parties a year.

Even with his Irish heritage, Monsignor Parks said he considers himself an adopted son of Poland.

“I guess you can call me Father Parkski,” the priest said with a laugh. “I found a happy home here and I hit it off with the people.”

With the exception of one year when he was sick, Monsignor Parks has celebrated the polka mass at “Polkamotion by the Ocean” for nearly three decades. The annual polka spectacular was held in Ocean City for most of its history and more recently relocated to Rehoboth Beach, Del.

“It was the best Mass of the year,” said Monsignor Parks, noting that nearly 1,500 people usually attend the liturgy. “The people are so quiet you could hear your shoes moving.”

Monsignor Parks described Sacred Heart of Mary as a “very faith-filled community” with a deep love for family life.

The popular pastor has no plans of slowing down in his retirement. He will still live in the area and he hopes to assist at local parishes while also enjoying some boating and traveling.