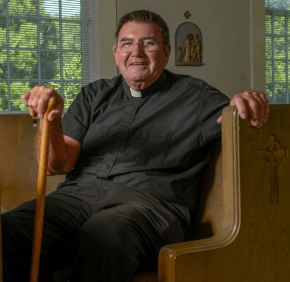 “He could make anything out of nothing.”

Mary Catherine Haynes was describing Father Mark Logue’s knack for turning humble ingredients into a gourmet meal, but her sentiment could also apply to his ability to transform a parish.

Father Logue will retire from the active priesthood at the end of August. He spent the last two decades as pastor of Our Lady of Sorrows in West River, which in 2001 nearly tripled its seating capacity with the addition of wings to its church.

He came to the southernmost parish in the Archdiocese of Baltimore from eastern Baltimore County, where his legacy includes converting part of a closed parish school at St. Luke in Edgemere into a warm worship space, and helping get a meal outreach off the ground at St. Rita in Dundalk.

“Father Mark did a great deal of the cooking at first,” Haynes said of Rita’s Supper Table, which she directs. “When it began in 1981, he was there every day to support us.”

Father Logue’s expertise in the kitchen includes summers working as a chef in North Carolina, in between his studies at St. Charles Minor Seminary and St. Mary’s Seminary (first on Seton Hill, then in Homeland). He also helped manage “Mr. G’s,” a family-owned sandwich shop in Catonsville, where he was raised.

It was at his home parish, St. Agnes, that he first felt the tug of the priesthood.

“I went to Forty Hours (devotion) with my mother,” he recalled. “She told me that afterward, I ‘hummed one of the hymns forever.’ I was in the third grade.”

Dee Wittschack has served as Father Logue’s secretary at the southern Anne Arundel County parish since 2001. She noted his willingness to promote existing traditions; eagerness to institute new ones, such as First Friday Mass and Supper; and openness to including all who wanted to contribute to the parish.

How great was the trust Haynes placed in Father Logue? From 2003 to 2013, she commuted from her home in Dundalk to Our Lady of Sorrows, where she served as director of religious education. To this day, the parish in West River sends both meals and youths in service to Rita’s Supper Table.

“It’s a little bit country here, laid back and quiet,” Father Logue said of Our Lady of Sorrows. “Every pastor says that his people are kind, and they really are here. I would go to spread the word about someone in need, and I’d hear, ‘We’ve already visited him.’ They seemed to be one step ahead of my suggestions.”

He experienced that mercy first-hand. In recent years Father Logue has been beset by serious medical issues that required 10 surgeries – three on each knee and four on his back – which led him, when able, to celebrate Mass from a barstool at the altar.

Our Lady of Sorrows numbers 800 families. When Father Logue got there, its church sat 150 people, but the addition of the wings created room for 400. The expansion was unveiled on Easter Sunday 2001, with not quite everything in place.

“The fire alarms weren’t working yet,” Father Logue, “and I had to sign an affidavit with the county fire department that I’d announce, in the event of a fire, that everyone had to get out of church.”

His communities prove the axiom, that one man’s junk is another’s treasure.

At Our Lady of Sorrows, the Knights of Columbus South County Council 8251 obtained the outdoor Stations of the Cross from the former retreat house at Manresa. (Elsewhere on the parish campus, Mary’s Garden is maintained by the Women’s Guild.)

The elements at St. Luke in Edgemere include stained glass that came from a closed convent in New York.

“We took a bland-looking hall and converted it into, what I think, is a pretty good worship space,” Father Logue said of St. Luke. “We did that in pieces, without a major fundraiser, the way a lot of homeowners living there would have.”

Whatever the location, he said, “One of my goals, was to get people to realize that it’s their parish.”

Father Logue, 68 – and his three Schnauzers, Sparky, Skittles and Lady – will retire to Rehoboth Beach in Delaware.

Physical therapy has allowed him to occasionally walk with the aid of just one cane as opposed to two. During his prolonged rehabilitation, are there any particular saints to whom he prays?

Forgive others and find peace, pope says during brief visit to Assisi