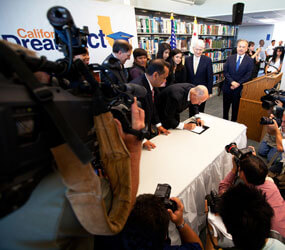 LOS ANGELES – Marking what community leaders labeled as a milestone and a historic moment, California Gov. Jerry Brown July 25 signed a portion of the state’s DREAM Act and urged Californians to “invest in the people” and to “engage in the debate.”

“It is crucial to make an investment in every child that lives and is born in California,” he said during a noon town hall meeting at Los Angeles City College, packed with community and business leaders, state and school officials, students and consuls from different Latin American countries.

“Signing the DREAM Act is another piece of investment in people,” he continued, “because people are what drive the culture of the economy in our country.”

Although elated, members of the California Dream Network that reaches more than 20,000 undocumented students on 42 campuses said they will not celebrate until the entire bill becomes law.

Under the California DREAM Act, or the Development, Relief and Education for Alien Minors Act, undocumented students attending California State University, California community colleges or the University of California will be eligible, on or after Jan. 1, 2012, to receive scholarships from private funds donated to schools. Currently, this segment of the student population is not eligible for any kind of financial aid.

The state version of a bill proposed on the national level would allow undocumented students to apply or participate in any financial aid program administered by the state of California to the full extent permitted by federal law.

The bill is currently under suspension in the state Senate, and students fear that it “will die along with the dreams of the 25,000 undocumented youth that graduate every year from state high schools.”

The governor admitted that legislators are dealing with obstacles along the way and described A.B.130, as it is called, as “one piece of a very important mosaic.”

“We are facing many obstacles and many adversaries,” he declared. “There are people who think California can grow by shrinking education and that’s the debate in our state Capitol.

“The debate is very clear: shrivel public service, shrink back, retrench, retreat from higher education, from schools, from investment in people or making investment.

“Our future is not only where the power or the wealth is,” he said. “It’s in the minds of people. Yes, it’s in the gold, it’s in the oil, it’s in the soil and all that, but it only takes the brains, the bodies, and the spirits of human beings.”

“Our future is uncertain if we neglect those children,” the governor continued, “but it’s absolutely abundant if we invest in their education, their child care, their future and their neighborhoods.”

According to Brown, 50 percent of the babies born in California are born under the Medi-Cal program designed for low-income families.

Assemblyman Gilbert “Gil” Cedillo, who first introduced the California DREAM Act in 2006 and was the author of A.B. 130 and a companion bill earlier this year, praised Brown for “being a man of his word.”

“You’ve had some great days as a governor, but I think this is maybe one of those days that you’ve already set a milestone,” he told the governor.

“This is about the children,” Cedillo said. “This is about us parents and all the hopes we have for our children.” He reminisced about a conversation with his mother that helped shape his concept of education.

“She talked about what a dignified person was and what an educated person was,” he said. “Education is for life,” his mother told him, a phrase he uses when undocumented students have doubts about pursuing higher education.

He thanked the students for inspiring him and giving him “new energy to do this.”

Speaking on behalf of the thousands of undocumented students, Ana Gomez shared how she fulfilled her dream of an education despite taking a two-hour bus ride and working full time during four years. She is an alumna of the University of California, Los Angeles.

“It was a nightmare,” Gomez, 25, told The Tidings, newspaper of the Los Angeles Archdiocese. In 2009, she earned a double major in history and political science.

“Today you are giving testament of the importance of education, the value of hard work, dedication and excellence regardless of immigration status,” she remarked.

Gomez arrived in Los Angeles from Mexico when she was 7 years old. She grew up knowing she was undocumented but excelled in school regardless, following the steps of her oldest sister, also undocumented, who recently earned a master’s degree in architecture from UCLA.