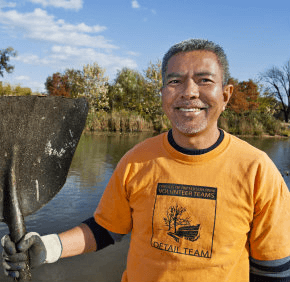 The sound of Victor Malabayabas clipping away the thick overgrown grasses around the Patterson Park lake is a familiar one.

While most who volunteer for the Friends of Patterson Park’s “Boat Lake Team” walk the perimeter of the water collecting empty liquor bottles and cans, food wrappers and other assorted trash, Malabayabas willingly jumps into the brush to trim away the overgrowth.

The 52-year-old also serves on the “Tree Team,” planting, mulching and weeding trees around the Baltimore City park and helps garden around the Pagoda.

“He does everything,” said Lesley Gardiner, volunteer coordinator for FOPP. “He’s not afraid to get dirty.”

“I love having the park in my backyard,” said an enthusiastic Malabayabas, who brings his two children, 11 and 7, with him when he volunteers. “If we all come together, we can make it beautiful for future generations.”

Although Malabayabas , a parishioner of St. Casimir, has been living and volunteering in Baltimore City for six years, his roots are in his native Philippines, where he worked as a Navy pilot for 11 years.

Sitting in the dining room of the Canton home he purchased with his wife, Carina Malabaybas, Victor told the story of why he came to the U.S. in 1996 and how he became a strong advocate and volunteer in his community.

Malabayabas explained that he was previously married, and his first wife, a nurse, petitioned for Victor and their two children to come to New York City.

“I couldn’t get a job I really wanted,” Malabayabas said. “I couldn’t fly because I wasn’t a citizen. So it was really tough.”

Then his first marriage ended and although Malabayabas struggled, he remained in the U.S. for his children.

He worked two jobs, one at a nursing home washing dishes, and one on a boat ferrying customers from Manhattan to Queens.

After the boat captain commented on Malabayabas’ work ethic and professionalism and learned his Filipino employee had a degree, he said, “You don’t belong here.”

While at his family’s Thanksgiving dinner in 1999, the boat captain stood up and said “This year I have one wish. I have a guy who works for me. He’s a good guy and I trust him. Is there anybody who can give him a job? If he can fly a helicopter, he can do something better.”

His sister raised her hand and said “Bring him to me.”

“I never forgot that boat captain or his sister,” said Malabayabas, who got a job working as a temp for Morgan Stanley, despite having no financial background.

But he was determined, and spent his own time after hours in the library at work, studying financial terms. Even today the bookshelf of his home is lined with books on accounting, cash flow and stock market logic. Encouraged by his boss, he took a test on brokerage operations and passed.

Today, Malabayabas is starting his 15th year with the company and works in cash management in the Fells Point office in Baltimore.

“I believe there are people, who regardless of who you are, are willing to help,” Malabayabas said. “There will come a time where I can do the same for somebody else.”

Malabayabas’ good fortune wasn’t limited to finding a good job. He also met his current wife, Carina, in the cafeteria at Morgan Stanley’s New York office. She attended college in the Philippines where he was working, but they didn’t meet until in New York. They have two children together and have been married for 12 years.

“I’m so happy I met her and we’re on the right course in our life,” Malabayabas said. “She helped me be close to God. I never read the Bible before. When I met her, things changed.”

Malabayabas volunteers as a weekly greeter at his East Baltimore parish.

With his salt and pepper hair and enthusiastic smile, Malabayabas has become a familiar face in the neighborhood.

“I really love this community,” he said.

He believes it’s important that his children see their father volunteering.

“I want to expose them to what volunteering is,” he said. “That way they will remember.”

“He really is the biggest advocate for volunteering,” Gardiner said. “He doesn’t just help, he tells everyone they should help. And his whole family volunteers.”

While in high school in the Philippines, Malabayabas remembered learning about a philosopher who said there are three things you can do in your life – bear children, plant trees and write a book.

Malabayabas spent a recent weekend in the park planting trees, and with a chuckle acknowledged that he hopes to one day write a book.