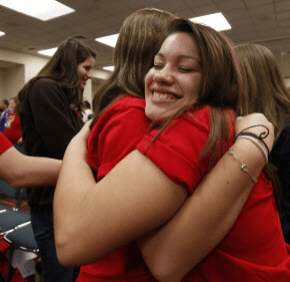 By Elizabeth Lowe
elowe@CatholicReview.org
Twitter: @ReviewLowe
Excited doesn’t begin to describe the way Jourdan Richard feels about attending this year’s National Catholic Youth Conference.
“We travel for hours and hours on a bus and we see all of these other people who have the same faith,” said Richard, 17, a parishioner of St. Mark, Fallston. “It’s so neat to see how big our faith is and how universal it can be.”
Richard is one of more than 200 youths from the Archdiocese of Baltimore attending the biennial event Nov. 21-23 in Indianapolis.
She is also one of five animators, or youth leaders, who will guide more than 20,000 youths in song, prayer and dance during main stage programming.
Colette Aroh, an animator who is attending the conference for a second time, credits NCYC with strengthening her relationship with God.
“It definitely deepened my faith,” said Aroh, a senior at Maryvale Preparatory School in Lutherville and parishioner of St. Ursula, Parkville. “I go to a Catholic school but being surrounded by thousands of screaming Catholics, it was another part of me got OK with expressing that.”
In addition to Aroh and Richard, the three other animators from the archdiocese are: Alyssa Baker, New All Saints, Liberty Heights; Justin Smith, St. Cecilia, Baltimore; and Siena Thrasher, St. Joseph, Cockeysville. They are among more than 100 other animators.
Approximately 210 youths and 79 adults from the Archdiocese of Baltimore are joining more than 20,000 youths, parish youth ministry coordinators, pastors, parents and diocesan leaders, among others, at the conference.
Here are some other facts and figures about NCYC, courtesy of Margaret Brogden, coordinator of youth ministry formation for the archdiocese.
·        Five buses were scheduled to leave Baltimore at 8 p.m. Nov. 20 and return early the morning of Nov. 24.
·        The Baltimore delegation is traveling more than 1,000 miles roundtrip, spending nearly 20 hours in transit.
·        Youths from the archdiocese received a crab hat, crab buttons and tattoos reflecting NCYC’s logo to wear and trade.
·        During the conference youths will write postcards to Archbishop William E. Lori and Auxiliary Bishops Denis J. Madden and Mitchell T. Rozanski.
·        Conference activities include Mass, a Holy Hour and various speakers. Confession is also available.
·        During NCYC, youths are challenged with packaging 100,000 meals, which will be boxed and shipped to West Africa.
For information about the conference, click here.
Also see:
Inside Sports: Loyola Blakefiled’s water polo players flow into swim season
What makes the archdiocese’s Blue Ribbon Schools go?
PrevNext