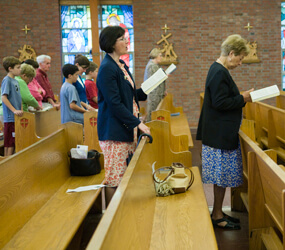 WASHINGTON – No matter the night, someone sleeps in St. Frances Xavier Cabrini Church in Scituate, Mass. It’s been that way since October 2004.

One night it’s 8-year-old triplets, their mother and their aunt. The next it might be a middle-age couple accompanied by friends. Then it could be a group of retirees who have always called the church home.

On Sundays larger numbers convene at the church, located on 30 acres in the seaside community an hour south of Boston, for a lay-led Communion service. The Eucharist is provided by a priest sympathetic to their cause. Masses have not been celebrated since the Archdiocese of Boston closed the parish in 2004.

Throughout the week members gather to participate in a variety of ministries. The people involved believe they are sending a determined message to Cardinal Sean P. O’Malley: Reopen our parish.

Rogers and a group he said numbers about 300 is holding out hope that an appeal before the Vatican’s Supreme Court of the Apostolic Signature will be resolved in their favor and Cardinal O’Malley’s decision will be overturned.

“It’s people reclaiming their faith and the church that sits at the center of their faith,” Rogers said. “It’s a revolution of faith to a certain degree.”

Parishioners at four other closed churches in the archdiocese also are maintaining vigils: Our Lady of Mount Carmel, East Boston; St. Therese, Everett; and St. James the Great, Wellesley, since October 2004, and St. Jeremiah, Framingham, since May 2005.

Similar vigils had continued for months at four other parishes, which the cardinal subsequently reopened. The nine parishes were among 65 that were closed in 2004 and 2005 during the archdiocese’s massive reconfiguration.

Despite the vigils, the parish groups know they face long odds. Peter Borre, co-chairman of the Boston-based Council of Parishes, formed in 2004 to oppose parish closings, told CNS that his research has turned up no successful parishioner appeal at the Apostolic Signature in the last 40 years.

Facing such a slim prospect, Borre and a coalition of 31 parishioner groups from eight U.S. dioceses in April called upon the Vatican to place a moratorium on closings and mergers nationwide and begin mediation to save as many parishes as possible given the challenges facing the American church.

The actions around Boston are the longest and the most visible efforts by American Catholics to challenge parish closings and mergers. From formal canonical appeals to the Vatican to public demonstrations and grass-roots strategy meetings, Catholics are working to prevent what they consider unwarranted actions on the part of bishops.

Efforts have sprouted in the Archdiocese of New Orleans and the dioceses of Camden, N.J., Syracuse, N.Y., Cleveland, Toledo, Ohio, and elsewhere. In each case, people are wondering why parishes they thought were vibrant, financially self-sufficient and had well-maintained facilities were being closed.

Across the country bishops have echoed the same reasons to close or merge parishes: changing demographics as people move from urban to suburban communities, financial viability and the declining number of priests.

In New Orleans, two people were arrested Jan. 6 for refusing to leave Our Lady of Good Counsel Church after a 10-week occupation. Archbishop Alfred C. Hughes made the decision to request police intervention when it became apparent that the people occupying the closed church would not leave after being asked to do so by archdiocesan officials.

The action has not deterred Alden Hagardorn, a member of neighboring St. Henry Parish, which also was closed, to join a weekly prayer service outside of his lifelong parish home.

“What we’re trying to do is spread the word we’re very much alive,” he said. “The reason we’re doing this is that we still have hope (St. Henry will reopen some day).”

Sarah Comiskey, director of communications for the archdiocese, said a reversal is unlikely.

“The archbishop has been steadfast in saying that the decisions of the pastoral plan are final,” she said.

Parishioners have recourse to fight closings, even if the likelihood of success is slim.

The Code of Canon law – Canons 1732-1739 – spells out a formal appeals process if individual parishioners feel they have been aggrieved by the suppression or merger of a particular parish.

The timeline for an appeal begins when a bishop announces his decision. Any individual parishioner has 10 business days – useful days in canon law parlance – to appeal that decision. Because of their position in the church, priests, especially pastors, cannot be part of an appeal.

If a bishop upholds his original decision or does not respond within 30 days, then the same parishioner has 15 useful days to appeal to the Vatican’s Congregation for Clergy. If the appeal is turned down again, a final appeal can be made to the Apostolic Signature.