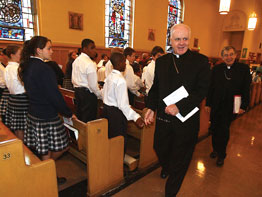 Archbishop Edwin F. O’Brien figured out a way to fill the pews during a regularly scheduled 8:15 a.m. weekday Mass at Our Lady of Fatima, Baltimore. He showed up.

Students from the adjoining school, camera-brandishing parishioners and Catholics hoping to catch a glimpse of the new archbishop of Baltimore packed the Oct. 25 morning Mass as Archbishop O’Brien kicked off a four-day tour of the 49 Baltimore City parishes.
Given a rock star’s welcome by large gatherings at some of the parishes, Archbishop O’Brien eagerly embraced these greetings as he traveled from church to church in a St. Bernardine tour bus with an entourage of Baltimore priests.

“It’s one of those occasions where everyone will remember what they did on Oct. 25,” said Norman J. Sporney, a parishioner of Our Lady of Fatima, who lives near the parish. “I know I’ll always remember.”

During the morning Mass and a talk before a prayer service for students at St. Francis of Assisi, Baltimore, Archbishop O’Brien urged the youngsters to thank their parents for providing them with a Catholic School education and to consider a religious vocation.

“I’m hoping the teachers in our schools also encourage the children to think about vocations in the church,” he said. “That’s where it took hold of me, in elementary school. Our schools should be a breeding ground for our future priests and sisters.”

The four-day tour was set up for the new archbishop to visit the churches, meet parishioners and become familiar with the urban portion of the see he now leads.
“Everyone here was really excited that he was coming here today and he said hello to me and shook my hand,” said Edward Regler, 13, of Mayfield, an eighth-grader at St. Francis of Assisi School. “It’s like a celebrity coming for a visit.”

While walking up the aisle of the ornate Shrine of the Little Flower in East Baltimore, Archbishop O’Brien marveled at the vast-cross-shaped church, before kneeling before the altar.

“The woodwork is beautiful,” he told Father Michael J. Orchik, pastor of the church, pointing to the back of the building.

During the tour, Father Orchik confessed the parish was located in an area of the city that in recent years has experienced a fair amount of crime.

“It’s not the roughest neighborhood in Baltimore,” he said, “but it’s pretty tough.”
Though many of the large city churches that once boasted huge congregations lost a significant portion of their populations in the decades since urban flight, the pastors of each parish told the new archbishop how they optimize their resources to maintain their buildings.
For instance, Father C. Lou Martin – pastor of St. Anthony of Padua/Most Precious Blood – brought in enough revenue into the parishes from renting out two halls that both churches are operating in the black for the first time in many years.

In an effort to cut expenses on heating and air conditioning and operate an environmentally “green” parish, weekend Masses at St. Dominic, Hamilton, are held in the smaller basement chapel, said Father James P. Kiesel, pastor of the church.
“When the school closed a few years ago, I had so many people come to me with fears that the parish was going to close,” Father Kiesel told Archbishop O’Brien. “I keep telling them, ‘no, it’s a very strong parish.’”

The archbishop continued his city-parish tour Oct. 26 and Halloween. He will conclude his initial city church visits Nov. 8 in the Harbor-West section of the urban vicariate.
“I’m impressed by the commitment of our Catholic citizens,” Archbishop O’Brien said. “Keeping the schools open when it’s become harder to do so. The word vibrant keeps coming to mind as I get to know the people here, and right now, that’s the mission.”