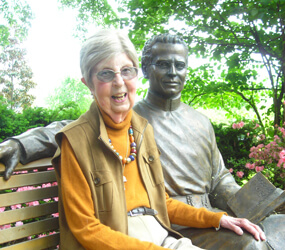 Mary Ellen Heibel, a parishioner of St. Mary in Annapolis whose cancer disappeared after she sought the intercession of Blessed Francis X. Seelos, died of pneumonia Oct. 9. She was 71.

A funeral Mass was offered Oct. 14 at St. John Neumann in Annapolis, a mission of St. Mary.

In May, Archbishop Edwin F. O’Brien opened an archdiocesan inquiry into Heibel’s alleged healing, appointing a panel to investigate the case and send its findings to Rome as part of the canonization process for Blessed Seelos.

Because Heibel died of pneumonia and not cancer, that investigation will continue and could lead to sainthood for Blessed Seelos, a 19th century Redemptorist priest, if Heibel’s healing is deemed miraculous.

“In addition to being a very devoted wife and loving mother to her three sons and daughter, I believe God had a very distinct mission for her in the later years of her life – which was to play her part in making Seelos better known, and, God-willing, advancing his cause,” said Redemptorist Father Byron Miller, vice postulator of Blessed Seelos’ sainthood cause.

“She sensed from God she had this special purpose,” said Father Miller, celebrant at his friend’s funeral Mass. “She took that mission and ran with it.”

Father Miller remembered that after a May article about Heibel’s healing appeared in The Catholic Review and was picked up nationally by Catholic News Service, Heibel received calls and e-mails from across the country and around the world. She took time to answer questions and share her love of Blessed Seelos and the Catholic faith.

“She inspired others and saw it as ministry,” said Father Miller, executive director of the National Seelos Shrine and the Seelos Center in New Orleans. “I think Seelos would be proud.”

“He came with his family and stayed the entire weekend,” Father Miller said. “He told me it was one of the most momentous things of his life.”

Doctors at Walter Reed Army Medical Center in Washington told Heibel in 2004 that the cancer that had attacked her esophagus and a lymph node in 2003 had spread throughout her body. Given six months to live, she underwent a new form of palliative chemotherapy at The Johns Hopkins Hospital in Baltimore to extend her life, but doctors warned that it could not cure her of the disease.

One week after Heibel began praying a novena in 2005 to Blessed Seelos, her tumors in both lungs, liver, back and sternum disappeared.

“I was just so excited. I called everyone,” Heibel told The Catholic Review in a May interview. “I never thought in a million years this would happen.”

Heibel said she was convinced that her healing was a miracle. She wore a relic, a piece of Blessed Seelos’ bone, around her neck.

“I was happy, because it stirred a lot of people to discuss prayer, prayer for healing and the intercession of saints,” said Father Kingsbury, one of Blessed Seelos’ successors as pastor of St. Mary’s. Blessed Seelos was also locally a pastor of St. Alphonsus in Baltimore and Ss. Peter and Paul in Cumberland. He died in New Orleans of yellow fever in 1867.

“She put none of the emphasis on herself,” Father Kingsbury said. “All the emphasis was on Seelos and giving glory to God for healing.”

Heibel, married to John L. Heibel Jr. for 53 years, was founder of Personal Property Consultants Inc – an antique appraisal firm now headed by her son, James Heibel. She suffered from numerous health problems throughout her life, including a kidney transplant, poor hearing and a bout with septic shock.

Father Miller noted that Heibel underwent a CAT scan in August that showed she remained cancer-free. That CAT scan and her death certificate showing that she died of pneumonia will be submitted to Rome as part of the canonization effort, he said.

“There wasn’t a spot of cancer in her body,” he said. “She was very quick to tell me the results and credit the intercession of Blessed Seelos. That will be a very strong piece of evidence.”

Eleven witnesses in Heibel’s healing case have been deposed and their testimony is being transcribed before it will be sent to Rome, Father Miller said

“I think she was destined to do what she did,” he said. “She was definitely a woman of faith.”