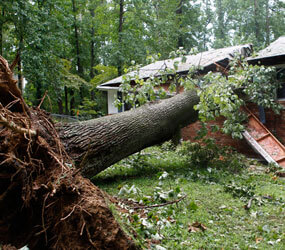 WASHINGTON – From the Carolinas up the Atlantic Coast into Canada, the trail of Hurricane Irene was one of dramatic floods, wind damage and other disruptions.

More than 40 people in various states were reported to have been killed by floodwaters, falling trees, car accidents and powerful waves. Irene hit the Carolina coast Aug. 27 and skirted the coastline, causing destruction in a dozen states before dumping inches of rain and causing at least two deaths in Canada.

A survey of some of the dioceses where the worst effects were felt found few significant problems at church properties, though the communities around them suffered serious losses.

In Vermont, where raging floodwaters from what was by then Tropical Storm Irene damaged or destroyed hundreds of roads, JoAnne Prouty, bookkeeper at Sacred Heart St. Francis de Sales in Bennington said the rushing water and the damage it caused were amazing.

The main highway connecting Bennington to the east, Route 9, is cut off.

“The road looks like it’s broken in half,” Prouty said. “It looks more like an earthquake hit it than floodwater.” All bridges in the area are at least temporarily off limits, some only until they can be inspected for serious damage, but others have been destroyed or have obvious damage, she said.

The parish served as an overnight emergency shelter to residents and staff of a small nursing home, Prouty said. But they were able to return home Aug. 29 after the danger of flooding at the nursing home was over.

And the parish’s food pantry, normally only open a couple of days a week, has been hit up by several families who lost all their food in the floods or because they lost power to refrigerators, she said.

“Lots of places were wiped away,” said Prouty. “There was an amazing amount of water everywhere.”

Damage was still being evaluated in areas of New York where Irene left trails of flood destruction. One town, Windham, N.Y., was all but “wiped off the map,” reported The Evangelist, newspaper of the Albany Diocese.

The newspapers of dioceses of Brooklyn, N.Y., and Providence, R.I., reported that the main damage to church property was apparently downed trees and branches, power outages and some flooding.

The churches fell within the city’s mandatory evacuation zones and most people did leave the area, reported The Tablet, the diocesan newspaper. Some, like the parish secretary, sought refuge at McManus Funeral Home, which opened its doors to the community.

“A lot of our people are bailing out from floods with trees down and power outages,” Monsignor Curran said. “It’s going to be a trying few days as people figure things out, but it’s a community where everyone helps everyone.” And as people return to their homes, he hopes that whoever left their Harley-Davidson motorcycle on the church grounds Saturday afternoon would kindly come and retrieve it.

In Rhode Island, where previous hurricanes had damaging tidal surges and rain, the wind from Irene was the main factor causing problems, reported the Rhode Island Catholic, newspaper of the Providence Diocese.

Parishes along the coast reported little damage, but inland churches had some minor structural damage and many downed trees.

A 10-foot decorative steeple atop Our Lady of Mercy Church, East Greenwich, was toppled by the strong winds. Auxiliary Bishop Robert C. Evans, who is in residence at the parish, reported to the pastor, Monsignor John C. Lolio, that he heard squeaking noises while he was praying in the church during the height of the storm Sunday morning.

A sexton later reported that the steeple had toppled onto the roof.

“It was worse than we thought,” said Monsignor Lolio. But, helpfully, the metal cross that decorates the top of the steeple was bent in such a way that it prevented the wooden structure from sliding off the roof and possibly injuring someone.

At St. Mary of the Immaculate Conception Parish, Pawtucket, winds punched out a board covering a 4-by-4-foot clover-shaped opening high up on the southern face of the steeple that once contained an ornate stained-glass window.

“We believe the original window was blown out in the ‘54 hurricane,” said the pastor, Father William J. Ledoux.

In Lexington Park, in St. Mary’s County, Father Jack Kennealy, pastor of Immaculate Heart of Mary Parish, near where some of Maryland’s most significant damage occurred, said his parishioners are primarily contending with downed trees and loss of electricity. Older communities where trees are tall and thick were hardest hit, he said. But the town’s main drag, Route 235, was functioning pretty quickly, he said.

Contributing to this story were Maria Elena Giossi and Antonina Zielinska in Brooklyn, Rick Snizek in Providence and Patricia Zapor in Washington.