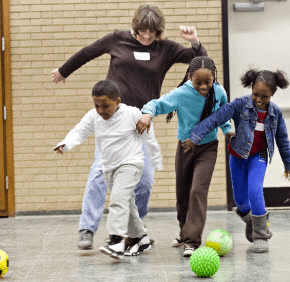 By Elizabeth Lowe
elowe@CatholicReview.org
Twitter: @ReviewLowe
Amy and Robert Prowell dropped their two children off at St. Matthew in Northwood April 13, and then headed to a local Home Depot.
“It would have been tough with them in tow,” said Robert Prowell, 33, father of 8-year-old daughter, Sarah, who has been diagnosed with autism, and son Sean, 5.
Parents Day Out is offered four Saturdays a year at St. Matthew, which gives the Prowells and other parents of children with developmental disabilities – including autism and Down syndrome – four uninterrupted hours. Some siblings without disabilities, such as Sean Prowell, also attend.
“It provides respite for the family,” said Barbara Metz, director of social ministry at the parish. “Even though it’s only four times a year, it makes a difference. We’re here to give the time and the space and the love.”
The free program began at St. Matthew in June 2007, Metz said. The Arc Baltimore, Inc. contacted St. Matthew with the idea for the program.
All participating families are connected through the Arc.
Becky Hartnett, family coordinator for The Arc Baltimore, a nonprofit that assists people with developmental disabilities achieve their potential and their families, said giving parents a break is “one of our goals is to make sure families have the tools to keep the family strong.”
On April 13, 10 children were paired with 10 volunteers and played with Legos, Play-Doh, hula hoops, glue sticks, markers, construction paper, books, videos, puzzles and toy trucks, among other items.
Some children were constantly in motion, running around the vast church hall.
Up to 15 children, ages 3-14, can attend each session and are paired one-on-one with adult volunteers, who are screened and trained by the Arc and St. Matthew, Metz said.
“Our volunteers, they are super,” Metz said. “They really are dedicated to this. They enjoy it and it’s not an easy thing to do. It takes a lot and they’re there willing to give it. I know the Holy Spirit is all over this.”
“They (parents) need the time,” said Betty Mathers, 86, a parishioner of St. Matthew and Parents Day Out volunteer. “It makes it better for the children. I love coming here and doing it.”
Cecelia Cole, a St. Matthew parishioner and Parents Day Out volunteer, relishes time with the children.
“The reward for me is seeing a smile on a kid’s face,” Cole said. “The paycheck is the reward of the parent’s smile.”
Cindy Russo, a widow and mother of 9-year-old Eric, who has been diagnosed with autism, said the program allows her time to “focus on my other kids,” who are ages 11, 14 and 17.
“I get a lot done on Saturday mornings,” said Russo, who on April 13 attended a fitness class and helped one of her children with a science project. “He (Eric) was looking forward to coming today. You know they’re in good hands.”
Russo also takes Eric to St. Joseph in Cockeysville, which began Parents Day Out in October, and St. Isaac Jogues in Carney, which began the program in March.
“It’s great for everyone,” Russo said.
PrevNext