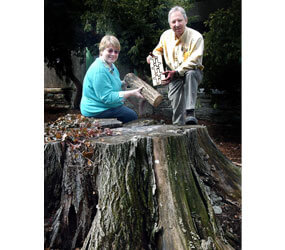 Although the tree was diagnosed with Dutch elm disease in 2006 and later taken down, it has remained part of the parish “landscape” through individual crosses designed from its wood.

The giant elm was more than 80 feet tall and its branches extended 120 feet. The trunk alone was 6 feet in diameter and the cut wood weighed more than 50 tons.

“As the Good Book says, ‘See how the cross of Christ stands revealed as the tree of life.’ That big old elm gave much life and shade here to our neighborhood for years,” said Father John Gibbons, pastor of St. Margaret.

“The crosses made from its wood remind us that Jesus’ life and care endure forever,” the priest told The A.D. Times, newspaper of the Allentown Diocese.

After the tree was taken down, several parishioners took a pickup truck full of wood to the Reading Muhlenberg Career and Technological Center with the intention of making crosses for the parish. The wood needed to be cured and the vocational school arranged to get a special piece of equipment that could be used to fashion “pocket” crosses.

Because of state funding, the equipment was delayed in coming and only arrived in the fall. Once it was in place, students at the center began working on the cross project.

This year during Lent, the parish fundraising committee sold crosses for $10 each. The crosses, along with information about the elm tree and the students who made them, were placed in a light purple bag and tied with a ribbon.

Christine Earl, who heads the parish fundraising committee and has been involved in all kinds of fundraising efforts, said the crosses were “just very special and truly unique.”

“We were all so sad when we lost our incredible tree,” Earl said, adding that no one would have thought that several years later “we would have crosses as a remembrance.”

“God certainly works in mysterious ways – and I believe with a sense of humor,” she said.

The tree had survived the great Dutch elm blight of the 1920s through the 1940s, and when it was found to have the disease in 2006, local tree experts tried to save it. Unfortunately, a city arborist later declared it dead.

Geraldine Wernicki, a member of the parish finance committee pointed out that the “massive and gorgeous tree” was part of a historic garden tour in 2007. “Hundreds of people came to see it,” she added.

The parish still has the tree stump outside the church and a collage of pictures of the tree coming down to remind them of how the crosses came to be.

“We think this is wonderful. We got to resurrect the tree,” Wernicki said.