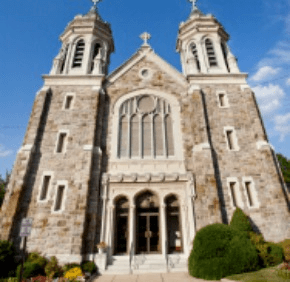 By Maria Wiering
mwiering@CatholicReview.org
The Baltimore County parish is celebrating Oct. 4 with a 5 p.m. centennial Mass at the church, followed by a 7 p.m. banquet at the Hilton Garden Inn in Baltimore. The banquet will include the parish’s inaugural induction of parishioners into the St. Michael the Archangel Hall of Honor. Banquet tickets are $60 per person. Father James L. Sorra is pastor of the 1,320-family parish.
–                     Around the time of St. Michael’s founding, Overlea was described as a destination for Baltimoreans to reunite with “country cousins.” The parish started with a strawberry festival that raised $500.
–                     The first Mass was held in November 1913 in a room above a grocery store. The church’s cornerstone was laid September 1914, and the first Mass at the church site along Belair Road was held in November 1914. The church was built in two phases – the lower and upper church – and dedicated in 1928 by Archbishop Michael J. Curley.
–                     Ursuline Sisters opened St. Michael the Archangel School in 1926 with 140 students. The Daughters of Charity assumed leadership in 1952 and staffed the school until 1992. This year, the school enrolled 198 pre-kindergarten (age 3) to eighth-grade students.
–                     St. Michael added a Spanish Mass in 2006, which draws 150-200 families.
–                     The parish is clustered with Rosedale parishes St. Clement Mary Hofbauer and Church of the Annunciation, sharing a youth minister and Lenten missions.
Also see:
‘Absolutely striking’: St. Margaret Church in Bel Air completes renovations
Parish milestone: Resurrection of Our Lord, Laurel, celebrates 50 years
Parish ‘date night’ part of intentional support marriages need
PrevNext