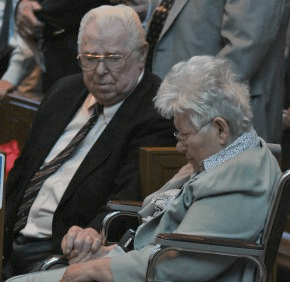 By Christopher Gunty
editor@CatholicReview.org
Communication, togetherness, forgiveness and respect were among the key attributes of a strong marriage as couples celebrated an annual archdiocesan jubilee Mass Sept. 28 at the Cathedral of Mary Our Queen in Homeland.
Normally the annual Mass highlights those married for milestone anniversaries, but this year, all married couples were invited to attend.Those who registered in advance received a certificate honoring their years of marriage, and the Mass included an opportunity for spouses to renew their vows.
According to Lauri Przybysz, coordinator for Marriage and Family Life for the archdiocese, 276 couples had registered for the Mass, though not all picked up their certificates of congratulations.
“The cathedral was nicely filled,” she said.
Augusto Gordillo said communication was the most important thing for their relationship, and his wife, Monica, chimed in to add, “and forgiveness.” The Gordillos, parishioners of St. John the Baptist in New Freedom, Pa., came to the Mass at the invitation of a friend in Baltimore, who, like Monica, is from Colombia, South America.
“Every time we have to talk about something, we don’t wait for the weekend,” Monica said before the Mass. “We prefer to calm down, but we don’t like to let things pass.”
Bernard and Penelope Dvorak, parishioners of Immaculate Heart of Mary, Baynesville, are celebrating their 50th anniversary and attended the Mass with their daughter, Ann Marie, and their son, David, and his wife and family. Another son, Bernard Jr., did not attend. Asked what kept their marriage strong for five decades, Bernard leaned conspiratorially and whispered, “Love.”
“We do everything together,” he said. Penelope now has Alzheimer’s disease, “but we had a good life,” Bernard added.
His son David noted that his father takes care of both his mother and his sister, who has a brain injury. Throughout the Mass, Bernard sat at the end of the pew next to Penelope in her wheelchair, and held her hand as he said the prayers.
In his homily, Archbishop William E. Lori wished the couples a “happy anniversary,” and tied his comments to the archdiocese’s 225th anniversary, being celebrated this year. He noted that the archdiocese is a family – God’s family – here in Maryland.
“I recognize that the real history of the Archdiocese has been made and written in the lives of the families that comprise this local Church. The story of your lives – your joys, sorrows, challenges, hopes, dreams and fears – your story is at heart of the history of this great archdiocese,” he said.
“For the Church is made up of people to be sure – but mostly it is made up of married couples, like yourselves, who have accepted from God the vocation to marriage and have also accepted the beautiful but challenging responsibility of family life,” the archbishop said.
Jairo Muñoz, attending with his wife, Pilar, said “Love, understanding, respect and a lot of communication” helps them stay happy in their marriage. The parishioners of St. Joseph, Cockeysville, have been married 19 years.
Jack and Joanne Fisher of St. Joseph, Cockeysville, who will mark their 60th anniversary in January, may have a slightly different way of accepting what the archbishop called “the beautiful and challenging responsibility of family life.”
“I say ‘Yes, ‘m’ a lot,” Jack said, smiling. “That works.”
Also see:
Parish ‘date night’ part of intentional support couples need
Couples with kids, cohabitating, are among those marrying at papal Mass
PrevNext