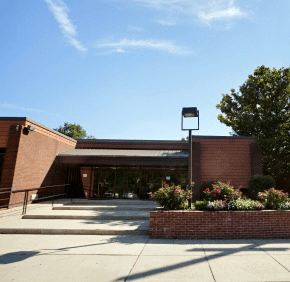 By Maria Wiering
mwiering@CatholicReview.org
Resurrection of Our Lord in Laurel is marking five decades Sept. 20 with Mass celebrated by Archbishop William E. Lori, followed by a gala with dinner. Father Mark S. Bialek is pastor of the 1,000-household parish. Historical information from Corrine Mohnasky, chair of the parish’s 50th anniversary committee, and Catholic Review archives reveal a diverse and growing community straddling the border of the archdioceses of Baltimore and Washington.
The community turned 50 in 2013 but is celebrating this year.
–         Originally a mission of St. Lawrence Martyr in Jessup, the Catholic Community of Maryland City – which would become Resurrection of Our Lord – had about 100 members in 1963 and worshipped at a Laurel movie theater and a local bingo hall. Parishioners taught CCD in their homes. The Archdiocese of Baltimore assigned a pastor to Resurrection in 1968.
–         Many founding members were government employees who worked at National Security Administration headquarters or other agencies in nearby Fort Meade.
–         The church building was constructed in 1970 as a multi-use facility and was remodeled for permanent use in 1991. It underwent a significant renovation in 2012, which involved the reorientation of the worship space.
–         According to lore, the decision to separate the worship and social spaces came after a visiting bishop smelled Old Bay lingering in the sanctuary from a recent crab feast. More improvements have recently been made in the church, entrance and hallway.
–         Resurrection is home to a vibrant Latino community, drawing parishioners from 23 countries. Mass is celebrated in Spanish each Sunday at 1 p.m. by Father Jesus Aguirre Guzman, who leads Hispanic ministry.
Also see:
Locust Point parish basks in Star-Spangled glow
Highlandtown leadership passes from one Franciscan order to another
PrevNext