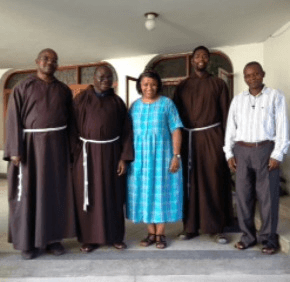 By Jennifer Williams
jwilliams@CatholicReview.org
In 15 years of traveling to various countries in Africa to bring school and medical supplies from the U.S., Dr. Camille Brown has amassed a collection of Blessed Virgin Mary figures and other artwork. Her favorite piece is of a small group of individuals holding up a clay jar sieve, using their fingers to plug the holes in the jar so that it can hold water. The symbol is said to come from one of the 12 historical kings of Benin, Africa, and is a metaphor for the kind of unity needed for the country to defeat its enemies and overcome its problems.
“If we all pull together, even a pot with holes can hold water,” explained Brown, associate superintendent for school leadership and community programs for the Archdiocese of Baltimore.

In some ways, Brown’s more than a decade of missionary trips to Africa symbolize the story of the clay jar – of people pulling together to accomplish a goal.
On her most recent 16-day-trip to Tanzania this July, Brown, a native of Philadelphia, took with her 6,000 rosaries. More than 1,000 came from the rosary guild at St. Stephen Parish in Bradshaw, which has had a partnership for several years with St. Steven Church in Mombasa, Kenya; 1,000 came from St. Cyprian Parish in Philadelphia, Brown’s home parish; 1,000 came from a woman whose ministry is to make 10 rosaries a day along with her mother; 1,000 came from the Xaverians; 1,000 came from the Oblate Sisters of Providence and others came from people who heard about Brown’s collection.
Sean Flynn, CEO of Flynn & O’Hara Uniforms, has been a regular contributor of clothing for Brown’s missionary work and this year sent eight boxes of new clothes and two boxes of backpacks.
“Unbelievable,” said a beaming Brown.
Brown said family, friends, people from Baltimore and groups such as the National Catholic Educational Association (NCEA) have helped.
“One woman on this floor (at the Catholic Center) gave me 300 protractors,” she said. “It’s all Catholic generosity.”
Everyone has been wonderful, Brown said.
“That energizes me,” Brown said. “It’s a lot of support, a lot of people.”

One of Brown’s stops this year was the Maua Seminary in the Diocese of Moshi, Tanzania, at the foot of Mount Kilimanjaro. There are 200 men there and the language is Swahili. The Capuchin Franciscan priests who run that seminary want the men to learn English, so to bring them catechisms in English was “incredible,” she said.
Brown, who exudes energy and enthusiasm for her missionary work, describes Tanzania as absolutely beautiful, “and the earth is a very rich, red tone like what you would see in South Carolina,” she said. Farmers in the country grow bananas, oranges, mangoes and rice. While Tanzania may be wealthy in crops, towns do not have running water, Brown said. Even in the major city of Dar es Salaam, there is no hot water.
News of the Ebola outbreaks in Ghana in West Africa did not deter Brown, who has had all her immunization shots and has been in meningitis, typhoid and cholera outbreaks as well as riots. “I believe God can call me home right now,” she said. “I know I can go home to God at any time.”
So why does Brown, who is 55, continue to make her missionary journey to Africa, sometimes struggling with eight 50-pound suitcases as she did this year?
On her first trip in 1999, Brown went to Benin to walk the slave routes her ancestors walked. She and her friend carried pencils and pens to give to parents and children.
“When we were giving out our supplies, they were so grateful to get a pen,” she said. “It almost made me cry that an ink pen, something our kids throw away, these people couldn’t afford it. They asked us to come back, so I promised I would.”
“I love to travel and to meet new people,” Brown said. “My aunt tells me, ‘You have a wanderlust spirit.’”
She said traveling to Africa helps her appreciate her American citizenship more. “I learn to appreciate my Catholic faith better,” she said. “I’m challenged on it a lot when I go into these countries.”
Does she think she’s making a difference?
“I hope so,” she said. “I hope so.”
Also see:
Aging artfully: Three retirement community residents still honing talents
Church upbringing credited with siblings’ achievement, bond
PrevNext