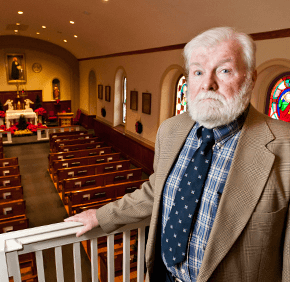 FOREST HILL – As Marion Townsley ascended a staircase to a 19th century organ, he noted the steps are from the 18th century when St. Ignatius, Hickory, was founded.

At the top of the stairs, Townsley said the space he was standing in wasn’t a choir loft; it was a former slave gallery.

Townsley, 75, is a lifelong St. Ignatius parishioner and Forest Hill resident. He has been the parish historian for 30 years. He is also caretaker of the parish cemetery.

“I love it,” said Townsley. “It’s something that you want to do.”

Townsley worked as an assistant manager at F. W. Woolworth Company in Bel Air until he retired in 1970.

“I promised myself I wasn’t going to do anything,” said Townsley, who has worked at St. Ignatius since.

In the past four decades, Townsley has cut grass, sung in the choir, served as a pastoral associate, director of liturgy, organist, sacristan and extraordinary minister of holy Communion.

“They told me I should have been a deacon, but it’s not my calling,” Townsley said.

Built in 1792, St. Ignatius’ historic church is the Archdiocese of Baltimore’s oldest church in continuous use and is listed on the National Register of Historic Places.

Townsley has learned the parish’s 220-year history from listening to others. When discussing the parish’s history with groups of visitors, he records his talks for future generations.

St. Ignatius’ museum is in a room in a wing of the historic church. Items include shingles and handmade nails from the church’s original roof; a chalice from Louis XVIII, king of France, in 1822; and vestments that date back to the 19th century.

Townsley estimates the parish has had about 25 pastors since 1792, “probably more than” any other parish.

“There’s so much history here,” Townsley said. “It (history) gives you a chance to see what other people did in their day. History has a lot of life to it. It’s not dead – it’s very much alive.”

Joan Strickroth, St. Ignatius’ corporator and head sacristan who has known Townsley for more than 40 years, called him “irreplaceable.”

“There’s not a person there that knows what Marion knows,” Strickroth said. “The church is his home.”

Monsignor James M. Barker, pastor of St. Ignatius, said Townsley “knows our parish like the back of his hand.”

“He knows where all the artifacts were from,” Monsignor Barker said. “He knows when they were purchased, when renovations were made to the church and which pastor did them. If any of us have questions on history, he’s the first one we go to.”