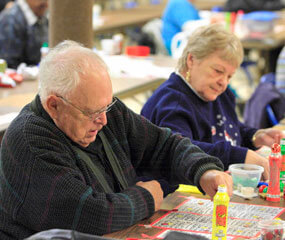 ALBANY, N.Y. – It seems that the “bingo bubble” in many areas of the Albany Diocese has burst.

The game of chance long subsidized many parishes and schools, bringing in tens of thousands of dollars a year in some instances. But today, group after group reports that the fundraiser stopped delivering, forcing them to cross it off their lists of moneymakers.

Some say commercial bingo halls and Saratoga’s Gaming and Raceway, nicknamed Racino, gave them too much competition. Others say the state bans on smoking in schools and public places scared players away.

For years, Albany diocesan officials, like church leaders in many U.S. dioceses, have discouraged church groups from hosting bingo, instead encouraging “good stewardship and generous free-will support” for financing programs. They say the game is a form of gambling, which the Catholic Church considers immoral if taken too far.

Bingo’s presence in other denominations varies. Some, such as the Baptists, eschew all gambling. Others may use bingo to raise funds for operations or charity, even while keeping more overt gambling on the “verboten” list.

Across the United States, religious leaders routinely band together to protest plans for new casinos, state lotteries or off-track betting.

Still, a handful of Catholic groups in the Albany Diocese defend the game of bingo as an important social outlet for senior citizens, as well as a viable fundraising tool.

“The church doesn’t play bingo the way they do other places,” explained Maria Swieton, president of the Rosary Society at St. Michael’s Parish in Cohoes.

Her group deploys teams of five to seven volunteers to the church hall Tuesday nights to make and sell food and moderate games.

Admission cards cost $2, while they can cost $15 to $40 at commercial halls or casinos. The St. Michael’s group charges a quarter for additional cards, a dollar for larger ones.

Their 80 weekly players average 80 years old, often coming as part of a nursing home trip with their aides. They can win up to $30 or $40 in a regular game, up to $400 in the last game of the night.

“I think it’s wonderful, keeping older people’s brains going,” Swieton told The Evangelist, newspaper of the Albany Diocese. “This is the best joy for these people.”

The Rosary Society renews its state bingo license annually, its city one biannually. State laws mandate the group gives all of its profit to the church. St. Michael’s makes about $20,000 to $25,000 per year from bingo.

“This is the big support for the church,” Swieton said of both bingo and penny social raffles, adding that Polish dinners and food sales also help.

The Saratoga council of the Knights of Columbus also values bingo as a fundraiser for charities and area Catholic churches, though their profits have declined in recent years.

The council makes between $200 and $600 weekly, while it used to make $1,000, said Roger Lampron, bingo chairman. A similar game called “Share the Wealth” helps, but the other halls in the area also offer it.

The Saratoga Racino, the state lottery and the sour economy also hurt bingo, the Knights say.

The Knights’ bingo draws about 120 people, from college students to retirees. The council follows state regulations and also creates its own rules, threatening to oust players for rowdy behavior or excessive spending. Players must play their own cards and cannot purchase more than 30.

“We don’t allow people to get out of hand,” Lampron told The Evangelist.

According to the Catechism of the Catholic Church, the concept of games of chance is not in itself contrary to justice.

“They become morally unacceptable,” the catechism explains, “when they deprive someone of what is necessary to provide for his needs and those of others. The passion for gambling risks becoming an enslavement.”

The Albany Diocese “outlawed” bingo in 1937 for an unknown period of time, according to a Time magazine story from that year. Today, the diocese still warns that gambling events “can prey on the weaknesses of those addicted to gambling, occasion the loss of money by people who cannot afford it, and make religion depend upon an income base inconsistent with its expressed principles.”

Sister Jane Herb, a Sister of the Immaculate Heart of Mary and diocesan superintendent of schools, asks schools to explore fundraising options other than bingo.

“What I’d like to see schools come to more is a steady stream of income from development efforts,” she said, adding that parents involved in bingo could use their time and talents in other ways.

Richard Gormon, past grand knight for the Saratoga council, said the Albany Diocese has never scolded or approached the Knights about its bingo games.

“We do have multiple functions,” he said, “and we never twist anyone’s arm to participate in them.”