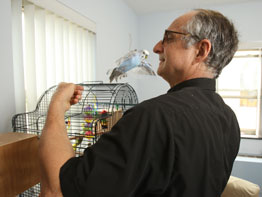 In the quaint fenced courtyard at the entrance to the friary at St. Casimir in Canton, the sweet chirping of birds can be heard, seemingly from the surrounding trees.

Yet if a visitor looked up to the second floor, he would find the source of the tweeting behind the screen of an open window.

“I’ve always had an affection and appreciation for animals,” said the slim Conventual Franciscan Friar.

The Franciscans are a religious order that follow the Gospel in the spirit of the founder, St. Francis of Assisi, a known animal lover.

“One of the charisms of those who follow in the Franciscan tradition is that appreciation and respect for creation,” Father Syracuse said.

Although owning dogs would be preferable, admitted the priest, Father Syracuse said he enjoys his feathered friends and the playfulness they add to his corner office.

“It’s always pleasant to hear them chirping even when it’s dark and dismal outside,” he said.

The blue parakeet, Buddie, is often found outside the cage or perched on the 57-year-old’s left shoulder. The bird easily hops onto an extended index finger when prompted. The others are still too shy.

“One day I went over to school with Buddie on my shoulder and one of the kids said, ‘Here comes St. Francis.’ ”

Hanging on the wall is a DustBuster, used every few days to capture the scattered feathers and tiny seeds that escape from the cage as the parakeets nervously dart from side to top to side again, and play with the colorful balls, ladders, bells and perches inside. In addition to seeds, they munch on carrots, apples and hard-boiled eggs.

Under Father Syracuse’s desk are small blue feathers, evidence left by Buddie as he enjoys the bottom of the desk chair as a perch. Sometimes he leaves a little “relic” on the priest’s black shirt as well.

Yet the priest wishes for more time to train the birds. Buddie speaks the phrase, “God bless you,” and another word that Father Syracuse says “I can’t tell you,” with a mischievous grin.

The chatter of air traffic controllers, via the Internet on Father Syracuse’s computer, is familiar white noise to the parakeets in his absence.

“Buddie mimics them – it’s really funny,” he said. “It’s like he’s talking, but you can’t make out anything he’s saying.”

Two wooden nesting boxes are attached to each side of the cage where the female parakeets can privately lay eggs. With Buddie as the proud dad, Sweetie laid six eggs the size of jellybeans in December. Tweetie hatched from one of them Jan. 8, with Father Syracuse videotaping the process.

“It was a thrill to see the little one hatch,” he said. “I kept records and sent videos over to the school so the kids could see the progress. It was a great event!”

Once the birds begin to mate and have chicks, they become more focused on themselves and are less interactive with humans.

The pastor picked up the plastic spray bottle to mist the parakeets with water, cooling them in a warm office. The birds shook off the water and continued their play.

Having pets in the house, Father Syracuse believes, “is something in all of us, call it a generative energy, to be around living things – although it’s a limited sense of companionship.”