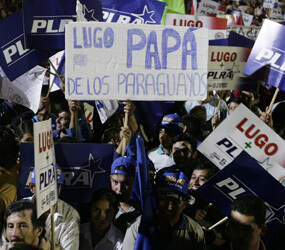 One came from a woman, Benigna Leguizamon, who said she sought help from him when he was bishop of the San Pedro Diocese.

Ms. Leguizamon, 27, told news media April 20, the first anniversary of Mr. Lugo’s election as president, that he was the father of her son, who is now 6. Paraguayan media reported that she met April 21 with the president’s lawyer, and that Lugo offered to submit to a private DNA test. Ms. Leguizamon filed a paternity suit against Mr. Lugo April 22, Paraguayan media reported.

In response to Ms. Leguizamon’s claim, Mr. Lugo read a message in which he said he would “act always with the truth,” submit to “all requirements of justice” and “keep this matter strictly private.” He referred reporters to his lawyer.

On April 22, the Paraguayan newspaper ABC Color published an interview with another woman, a 39-year-old grass-roots leader and former coordinator of social ministry in the San Lorenzo Diocese, who said Mr. Lugo was the father of her 16-month-old son. The woman, Damiana Moran Amarilla, said it had been a relationship of “unconditional love” that began after Mr. Lugo stepped down as bishop of San Pedro, and that she would ask nothing of the president.

The latest reports came a week after Lugo admitted to fathering a boy who will turn 2 in May and agreed to pay child support to the boy’s mother, Viviana Carrillo, 26, who had filed a paternity suit April 8. The child was conceived after Mr. Lugo left his post as bishop to run for president, but before the Vatican laicized him.

Ms. Leguizamon’s parents told Paraguayan media that she had never told them who the child’s father was, but that during the presidential campaign someone had offered her money to reveal the father’s name. They said she decided to come forward after the Carrillo case was publicized.

In a radio interview April 20, Bishop Rogelio Livieres Plano of Ciudad del Este, on the Paraguay-Brazil border, said the Paraguayan bishops’ conference had known of possible paternity cases involving Mr. Lugo when he was a bishop, but covered them up.

Bishop Livieres said that between 2002 and 2004 the papal nuncio in Asuncion received letters from several women who claimed Mr. Lugo had fathered their children. He claimed Mr. Lugo had not denied the accusations and had resigned under pressure from Paraguayan church leaders.

The Paraguayan bishops’ conference responded with a statement saying it “regrets and rejects” Bishop Livieres’ comments “which imply that there was cover-up and complicity by Paraguay’s bishops about the moral conduct of then-Bishop Fernando Lugo.”

In the statement, the bishops said they had “never received a formal written complaint about Bishop Fernando Lugo referring to issues of alleged paternity.” If the nuncio received complaints, the statement said, “their handling was the exclusive responsibility” of the Vatican representative.

The statement said the bishops’ conference did not receive a letter from Lugo when he left the San Pedro Diocese in 2004 and learned of his resignation in January 2005, when the Vatican accepted it.

After resigning, Mr. Lugo worked as a school principal in Asuncion until December 2006, when he announced he would leave the priesthood and run for president. He won the April 20, 2008, election, but the Vatican did not laicize him until the end of July, just two weeks before his inauguration.