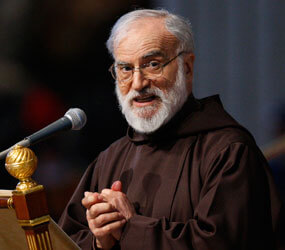 VATICAN CITY – Genuine love for others is the cornerstone of charity, but it needs to be backed up by concrete action to be a complete expression of God’s love for humanity, the papal preacher said.

In a Lenten meditation released by the Vatican April 8, Capuchin Father Raniero Cantalamessa explained that Christian charity should be characterized by “a love that is both sincere and active; a love from the heart and a love, so to speak, of the hands.”

Father Cantalamessa warned that those who perform charitable acts without a heartfelt desire to help others may be merely hiding less virtuous motivations such as “selfishness, the use of others for their own purposes, or simply a guilty conscience.”

He cited St. Paul’s Letter to the Romans in which he calls on Christians to act with charity without hypocrisy. The call for “a love that is true, authentic and not fake” was the cornerstone of St. Paul’s message, Father Cantalamessa said.

“Hypocritical love,” the papal preacher said, “is that which does good works without feeling, that shows off to the outside something that is not actually felt in the heart.”

With this in mind, however, it would be a “fatal error” to “hide within one’s inner charity, using it as a sort of alibi to avoid charitable actions,” he said.

With charity that comes from the inside but is also expressed on the outside, he said, “we love others with the same love God has for us.”

Father Cantalamessa said another way to promote a real spirit of love of one’s neighbor included avoiding gossip, “which seems like something innocent, and instead it is one of the things that most makes living together difficult.”

Referring to Jesus’ exhortation to “judge not and you shall not be judged,” Father Cantalamessa warned against making negative judgments about others.

While acknowledging that it is nearly impossible to go through life without taking a measure of people and events, the quick jump to harsh judgment is contrary to the message of Christ and of St. Paul, he said.

“It is not that we need to rid our hearts of judgment,” he said. Christians should rather not succumb to “the poison, hostility and condemnation of our judgments,” he said.

Men and women are not the only ones in need of the selfless love for one another, Father Cantalamessa said. The church, too, “has urgent need of a wave of charity that will heal its fractures,” he said, without mentioning any specific problems.