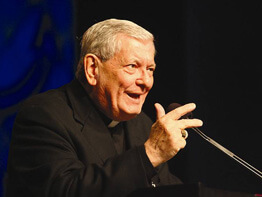 While many may consider Michelangelo to be one of the greatest artists of all time, Pope Benedict XVI’s apostolic nuncio to the United States told more than 8,000 Catholic educators their daily ministry surpasses the artistry of the great Italian Renaissance sculptor.

Presenting the April 10 keynote address during the opening session of the National Catholic Educational Association convention at the Baltimore Convention Center, Archbishop Pietro Sambi said educators touch the lives of children at the most fundamental level.

In “The Pieta,” a marble sculpture depicting the Blessed Virgin Mary holding the dead body of Jesus, Michelangelo captured “deep human sentiments” of suffering and confidence, the nuncio said.

“But the greatest artists of the world are the educators – you,” Archbishop Sambi said to warm applause. “You sculpt the best of what you are, not in a piece of marble, but in living human beings who are the glory of God.”

Archbishop Sambi noted that his mother and sister both served as teachers and Pope Benedict himself devoted much of his life to Catholic education as a professor.

“He’s a person who understands perfectly the labors, the greatness and the utility of your daily work,” said Archbishop Sambi, who extended the pope’s blessing on the educators.

The nuncio said he agreed with Archbishop Donald Wuerl of Washington, D.C., who insisted that the top three priorities for the country are “education, education and education.”

“Looking at you, I see a morning of better days – of new days – for the country and for the church,” said Archbishop Sambi. He added that while those gathered for the convention have probably forgotten much of what they were taught in school, “there is inside of us a lot of the example of teachers.”

In an interview with The Catholic Review, Archbishop Sambi emphasized that Catholic education is “given not only by words, but by example.”

“Catholic education should have a high quality of teaching, the discipline for life and moral values to help the young people to choose what is better, more honest, more generous, more beautiful,” he said.

In welcoming the convention goers to Baltimore, Cardinal William H. Keeler said Catholic educators “are all about spreading the good news of Jesus Christ.”

“I thank you on behalf of all the bishops of the United States for your strength, for your generosity and for your work,” he said. “Through teaching at all levels of all Catholic education, you are passing on and protecting our faith.”

The NCEA convention was held April 10-13.