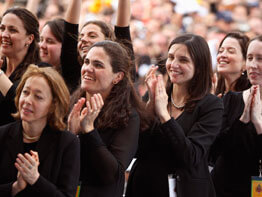 Laura Vesely remembers her parents’ excitement about attending the papal Mass when Pope John Paul II visited Baltimore in 1995. It didn’t seem fair that she was left behind to watch it on television. But, then again, she was only in elementary school at the time.

Now as Pope Benedict XVI makes his historic visit to Washington, D.C., the tables are turned. Ms. Vesely, 20, attended while the older generation stayed home. So was it worth the 13-year wait?

“It was amazing,” Ms. Vesely said, hours after the Mass on April 17. “I will always remember it – definitely. But it was a lot to take in.”

Ms. Vesely, president of the Towson University Newman Club, received one of the 500 tickets that the Archdiocese of Baltimore set aside for youth groups. The tickets were divided among Catholic high schools, area college Newman Clubs and parish youth groups.

Mark Pacione, director of the Division of Youth and Young Adult Ministry for the archdiocese, organized the distribution of tickets to the youth groups. While each group arranged its own transportation, Baltimore youths could identify one another by yellow bandanas emblazoned with Pope Benedict’s “Dare to Love” quote from World Youth Day 2007.

“Adolescents, like everyone in the world, are looking for heroes. And he is very inspiring. This is a guy who says very powerful things,” Mr. Pacione said, explaining young people’s interest in Pope Benedict.

“One who has hope lives differently,” Mr. Pacione continued, quoting the phrase from the pontiff’s 2007 encyclical “Saved by Hope” that has been plastered all over the Washington transit system in an ad campaign. “It’s perfect. I think young people understand that they are challenged to live differently and have the humility to serve.”

That theme of hope resonated in particular with Cormac White, 17, a junior and a peer minister at Calvert Hall College High School, Towson. “The main theme he kept re-addressing was hope and how you can find hope in the world around you, through Jesus and religion,” said Cormac as he returned home from the Mass.

Clara Enriquez, 23, a parishioner of Holy Trinity in Glen Burnie and a member of the Archdiocesan Hispanic Young Adult Council, admired the pontiff’s eloquence. “His words were very touching and powerful and rich. In every sentence, there was a full message,” she said.

And when those words were in her native tongue, the message felt personal. “When he started speaking in Spanish, I felt like he was talking to me, Clara – like he came all the way here just to talk to me,” she said. “He gave us, the Hispanic community, a mission to help grow the faith.”

Ms. Vesely said she was surprised by how culturally diverse the Mass was. It was presented in Spanish and English, and the petitions were in many different languages, said Ms. Vesely, who asked Father T. Austin Murphy, chaplain of the Newman Center at Towson University, if all papal Masses were like that.

For Shanice Woodland, a 17-year-old senior at Baltimore Polytechnic Institute who attended the Mass with the St. Peter Claver and St. Pius V youth group from Baltimore City, the thing that stood out most was the fact that thousands of people from all over the country came together.

“It was a very spiritual and exciting event,” she said. “I know it’s not often that the pope comes to the United States, so it will be something I will always remember.”

She said when the pope first came out, everyone was cheering.

“But when the Mass started, they were very connected to what he was saying,” she said.