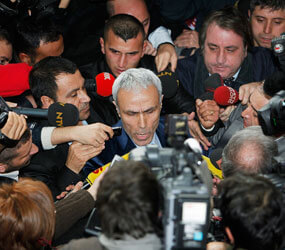 VATICAN CITY – The man who tried to kill Pope John Paul II in 1981 was released Jan. 18 from a Turkish prison.

Mehmet Ali Agca, 52, was taken from prison to a military hospital to be assessed for compulsory military service, which is obligatory for all Turkish men. Agca fled the military draft in the 1970s.

In a statement released by his lawyer immediately after his release, Agca made the kind of wild declaration for which he has become known, proclaiming himself “the Christ eternal,” saying he intended to write the perfect Gospel and predicting the end of the world in this century.

Agca, who had connections to a Turkish ultra-nationalist group, shot and seriously wounded Pope John Paul in St. Peter’s Square on May 13, 1981. He was apprehended immediately, tried in an Italian court and sentenced to life in prison.

Agca at first said he had acted alone. He later claimed the Soviet KGB and Bulgarian agents were involved in the papal shooting, but his alleged accomplices were acquitted in a second trial in 1986.

Pope John Paul publicly forgave his assailant, and in 1983 he visited Agca in a Rome prison cell. In 2000, with the pope’s support, Italy pardoned Agca and returned him to his native Turkey, where he began serving a sentence for the 1979 murder of a Turkish journalist.

In recent weeks, as his prison release date approached, Agca made several written statements, saying among other things that he wished to visit the tomb of Pope John Paul II at the Vatican and hoped to team up with writer Dan Brown on a “Vatican Code” project.

At the Vatican, Cardinal Peter Turkson, president of the Pontifical Council for Justice and Peace, said he had no objection to Agca coming to pray at the tomb of Pope John Paul.

“This is a normal thing to do…. The first to forgive him was John Paul II,” Cardinal Turkson told an Italian TV news network. The cardinal added that Agca would have to be accompanied by a large number of security guards if he visits the Vatican.

Over the years, Agca has claimed to be Jesus Christ, an angel and a prophet. His incoherent ramblings have touched on topics including World War II and the dogma of the Assumption.

When Pope John Paul expressed his belief that Mary had saved his life during the papal shooting, which occurred on the feast of Our Lady of Fatima, Agca began studying the Marian apparitions at Fatima and soon began proclaiming himself an agent in a divine plan.