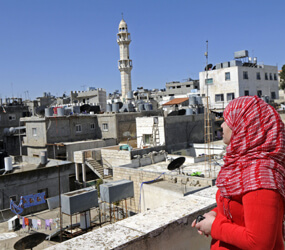 AIDA REFUGEE CAMP, West Bank – When Pope Benedict XVI comes to the Aida Refugee Camp May 13, Um Omar will climb to the balcony on the top floor of her building and wave both her hands in a victory sign in his direction.

“We don’t have money to pay the water and electricity bills. If he can help us with that, he is welcome. If he can help us remove the wall, he is welcome,” said Um Omar, 52, whose given name is Widad Abu Akkar but who is known by the traditional moniker of “mother of Omar,” her oldest son. She has raised all 14 of her children in a cramped 650-square-foot, three-bedroom apartment.

When her children were growing up there was an open field opposite their apartment building and she would spend most of her time there, letting them tumble about as they enjoyed picnic lunches. Today, the building – which has grown by four floors as sons and cousins have married and built apartments for their wives – overlooks the stage in front of the Israeli separation barrier from which the pope will address the camp’s 4,860 residents.

While much of the camp is a jumble of narrow, sunless, garbage-strewn alleyways, on his visit the pope will be taken down the wide dusty main road to the stage abutting the wall, which separates the camp from Bethlehem.

“I don’t know what he is coming to do,” said Mourad Malash, 23, who is unemployed and spends his time between his home and the houses of his friends. “He should ask the youth how they feel. Can he find jobs for the people?”

Teenage boys amble through the streets in the early afternoon on their way home or to visit friends. All of them have quit school and now spend their time playing computer games, hanging out like teenagers do and sometimes walking into Bethlehem for a pizza or a “shwarma,” a sandwich made from thinly sliced, spit-grilled meat stuffed into a pita.

They want the pope to remove the separation wall, create jobs and build places for youth activities.

“If I could I would go live anywhere abroad,” said 17-year-old Hazzam Abu Akkar, who, as a third-generation refugee, feels little connection to family lands that he has never seen in the West Bank village of Ras Abu Amar, near Hebron.

“I don’t think the pope’s visit will make much difference,” said Saddam Sduk, 16, who was injured by Israeli soldiers in 2004 while playing soccer on a field now separated from the camp by the wall. One of his friends was killed in the incident. “The other pope came to Dehiyshe camp and what did he do? We want to have something fun to do here. After his visit he should leave us a park or something.”

Following the second intifada the high school dropout rate increased, said Salah Ajaram, 36, general manager of the camp’s Lajee cultural center and a member of the coordinating committee for the pope’s visit. He fears that the lack of education is harming the younger generation.

During the years after the camp opened in 1950, the refugees, displaced during the 1948 Arab-Israeli war, lived in tents. Later they built small one-story homes. As the population grew so did the buildings, climbing skyward because there is no other place for expansion. For many years the refugees refused to leave the camps, believing that if they did so they would forfeit any claims, including the right of return to their old homes. Today many of the second- or third-generation refugees have moved to less-crowded quarters.

The worsening economic situation is making it more difficult for people to buy land or apartments outside the camps, explained Ajaram, whose family hails from the West Bank village of Ajour and whose lands are now part of an Israeli kibbutz.

“They know that no matter where they are living physically they will always still be refugees,” said Ajaram, whose organization last year received funding from the Pontifical Mission for Palestine for a new activities hall for youngsters.

This year the Pontifical Mission for Palestine – a Vatican-founded relief agency under the direction of the New York-based Catholic Near East Welfare Association – also will provide funding to the Aida Camp Al Rowwad Cultural and Theater Training Center with a grant from the Salam ya Seghar (Peace for the Children) program.

A large metal sculpture of an old-fashioned key perches atop the main entrance to the U.N.-administered Aida camp, symbolizing the refugees’ right to return as well as the keys to their ancestral homes – keys many of the families say they still have in their possession.

“The most important man in the world is coming here. He can bring thousand of journalists with him (to see our life here),” Ajaram said. “He can be close to the wall and see how the wall separates our lives between our people. He is the one to talk about justice and peace. We feel there can be no justice without the right of return and the pope can take this message out with him.

“To stay in your country as a refugee is more difficult than living as one outside,” Ajaram added.

More than two dozen people were killed in the Aida camp during the second intifada, and Israeli soldiers still conduct raids into the camp to arrest men suspected of terrorist activities. Many of the young men have been jailed on various charges, including belonging to terrorist groups or throwing stones and Molotov cocktails at Israeli soldiers.